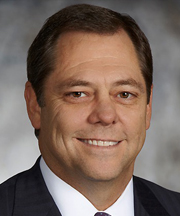 From his first year as a Baylor Freshman in 1975 to his prominence as an industry and business leader, Paul L. Foster’s legacy at Baylor University has continued to build. That legacy provides encouragement and inspiration for the students who follow after him on That Good Old Baylor Line.

While a student at Baylor, Paul worked at various jobs to help make ends meet. He also worked toward earning a bachelor’s degree in business administration, which he received in 1979. Throughout those four academic years, Paul credits dedicated professors and faculty who held him accountable to his dreams of a higher education.

Upon graduating, Paul followed his academic path and entered the accounting field, working for a number of refineries and as an oil and gas consultant for an accounting firm. Paul always knew he wanted to work in the oil and gas industry, and eventually to own his own company. That opportunity came in 1997, when he founded Western Refining to handle the assets of a bankrupt refinery in El Paso, Texas. In 2000, Western Refining bought the refinery in El Paso and Paul’s vision of owning a company in the oil and gas industry became a reality.

In 2008, Paul married Alejandra de la Vega, a respected businesswoman in the state of Chihuahua as well as throughout Mexico. She is well known for her dedication to community support on both sides of the El Paso/Ciudad Juarez, Mexico border. She and Paul continue to live in the city they love, pursuing varied business and civic interests and spending time with friends and family, especially their grown children, Preston and Kassi.

Through his visionary giving, Baylor University’s students are reaping life-changing rewards. Paul’s experience as a student profoundly influenced his approach to giving back to Baylor through the establishment of the Paul L. Foster Success Center and the Paul L. Foster Campus for Business and Innovation. His focus is upon the generations of students who, like him, need the support of caring faculty and staff who invest of themselves in their students’ achievements.

Baylor University gratefully acknowledges Paul for his transformational support. May the students who pass through these halls of learning understand that, like Paul Foster, God’s purpose and plan for their lives bears fruit through faithful dedication, hard work, and the pursuit of excellence.