There are a number of sedimentary facies that have the potential to be dated by luminescence. A luminescence age for clastic sediment is a measure of the time since the last sunlight exposure. The zeroing of luminescence in mineral grains, usually by sunlight, must be related to a significant geologic event, like burial of soil with sand-blow emplacement or colluviation post-faulting for the OSL age to be meaningful. Eolian sediments, like loess, sand sheet deposits, dune sands and cover loams are the most preferred sediments for OSL dating because of the long (hours) light exposure prior to deposition. Also, littoral and sublittoral sediments often receive long light exposure within the swash zone (Argyilan et al., 2005), though storm beach deposits may be variably solar reset. 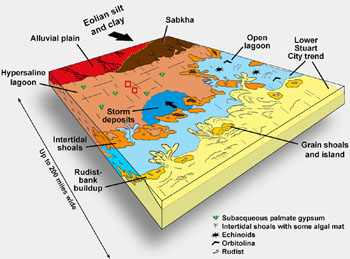 Mineral grains in water-lain environments such as glacial-marine, certain lacustrine and fluvial can be incompletely solar reset reflecting attenuation of spectra as light penetrates a turbid water column. Low energy fluvial sediment, like shallow channel fills with millimeter-scale, horizontally-bedded, medium sands is the preferred facies for OSL dating (Schaetzl and Forman, 2008). Higher energy facies with erosion of previous deposited sediments and formation of new grains with clast percussion during saltation and creep at the base of the water column often yield a mixture of apparent grain ages. Colluvial and alluvial sediment, often associated with normal and reverse faulting, may be amenable for OSL dating, though care is needed to avoid sampling intraclasts in proximal colluvium, closest to the fault zone. Proximal colluvium is difficult to date by OSL and yields often highly dispersed equivalent dose values by aliquots and single grains, necessitating the use of finite mixture models (e.g. Cortes et al., 2012). Distal colluvium, deposited by grain transport with overland flow down slope of the fault offset can be well solar reset and is more suitable for OSL dating (Forman et al., 1989; Sohbati et al., 2012). Weathered horizons exhibiting pedogenic accumulations of clay, silt, carbonate, or silica should be avoided scrupulously for OSL dating. Post-depositional pedogenesis can affect detrimentally the luminescence time-signal by altering the radionuclide concentration, disrupting crystal structure and mixing in fully or partially solar-reset grains, and thus increasing overdispersion values (Ahr et al., 2012).

Detailed study of luminescence characteristics of quartz grains in soils indicate that the upper (<5 cm) part of A horizons in well-developed soils (e.g. alfisols) are well solar reset and is another target for OSL dating, particularly in the buried context (Ahr et al., 2012).

Collection of sediment for OSL dating 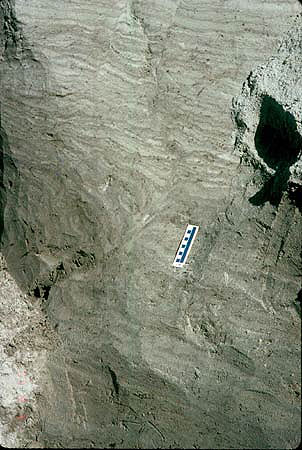 Sampling sediment for luminescence dating is relatively straightforward, though care should be exercised that the appropriate sedimentary facies is sampled. It is critical that the sedimentologic, pedologic, stratigraphic and tectonic context is well known prior to sampling, so a judicious decision is made on sample selection that weighs the likelihood of solar resetting with original deposition, minimizes pedogenic alterations, and maximizes that the sediment-depositional (OSL) age closely constrains tectonic activity. Ideally, at the sampling site at least 20 cm of homogenous sediment should surround the collected sediment to maximize uniformity in the dose-rate environment during the burial period. Sampling within 20 cm of boulders or major lithologic contacts should be avoided to obviate potential inhomogeneities in radioactivity. If such inhomogeneities cannot be avoided field gamma spectrometry or collection of sediment from the disparate units is advised to document the in situ dose rate. Also, care should be exercised in collection samples within 1 to 1.5 m of the surface, with likely pedogenic alterations. Approximately 30g of sediment should be collected, though more or less sediment may be adequate depending on the concentration of the chosen particle size for dating. The geological luminescence signal of sediment is reduced rapidly with exposure to sunlight, thus care must be taken not to expose the sediment to any light during sampling. The OSL signal of quartz is significantly reduced with a few seconds of light exposure.

Prior to sampling, the section should be excavated back at least 20 cm to expose a fresh face. Immediately prior to sampling the face should be scraped free of light-exposed grains on the surface. It is best to take the sediment intact; though the outer mineral grains may have been light exposed, the internal grains have been shielded from sunlight. The most efficacious approach for sampling for OSL dating is to use light-tight sediment coring tubes, composed of aluminum, copper, steel or black, stiff plastic, like ABS. The tube should be 10 to 20 cm long, 2 to 4 cm diameter and with an end cap the tube can be hammered or pushed in to the desired sediment for dating. For clay-rich or indurated sediments blocks can be carved from the section and placed in metal tins or other metallic containers. A secondary bag-sample of sediment (~20 g), that can be light exposed should also be taken from a 20 cm radius from the tube/block collection point for elemental (dose rate) and particle size analyses.