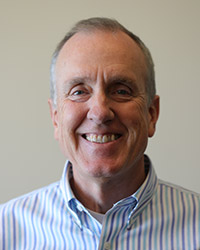 I joined the Department of Geosciences in 1995 after seven years in the petroleum industry where I worked for both Mobil and Exxon, which through an acquisition of Mobil by Exxon in the early 2000s is now ExxonMobil….thus simplifying my resume. My primary expertise is in sequence stratigraphy, and although most of my effort is directed toward oil and gas exploration and production, I am also heavily involved in pure research projects in conjunction with the Baylor Geoscience Terrestrial Paleoclimatology Research Group (TPRG). In my role as a petroleum geologist via Baylor’s Applied Petroleum Studies program, most of the projects that I work on address problems associated with conventional and unconventional Mesozoic and Paleozoic reservoirs in Alberta, Canada. Why Canada? Firstly, because the borehole data is all publicly accessible so it’s very easy to design research projects that incorporate all existing data, and secondly, because Canada, and in particular Alberta, Canada, is an exceptional place to spend time doing research during the summer months! In my role as a pure researcher within the TPRG, I collaborate with other Baylor faculty in the reconstruction of environmental, climatic, and biological changes during interesting periods in Earth’s history, e.g., the Late Triassic in the Chinle Basin of the American southwest; the Cretaceous-Tertiary transition recorded in southwest Texas and southern Alberta, Canada; the Paleocene of the San Juan Basin, New Mexico; and the Late Devonian of Alberta, Canada. All-in-all, my research and interests are highly varied, and students working with me typically complete their project as part of a larger, and highly-integrated team of students, Baylor Geosciences faculty, and external researchers. Students involved in such projects cultivate a wide-range of conceptual and analytical skills, and are highly marketable upon graduation. My students are well-prepared for careers in either industry, academia, or governmental agencies. As far as what it’s like working with me, I’m a people-person and really enjoy spending time with my students and colleagues. There’s never a dull moment…..ask any of my current students….names and email addresses provided upon request. I hope to see your application!