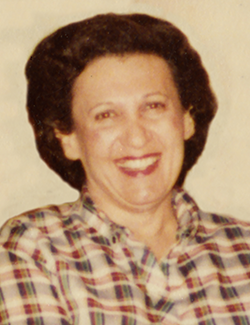 Ima Joy Chodorow Gandler was born October 25, 1929, in Waco, Texas, to Nathan and Miriam Borschow Chodorow. She was a 1946 Waco High School graduate and attended the University of Texas. Ima Joy Chodorow married Jacob E. "Jake" Gandler on June 25, 1950, and they later had three children: Sharlane Michaele, Laura, and Howard.

As an active member of Waco Temple Rodef Sholom, Gandler began collecting materials on Texas Jewish culture in the 1970s as the Temple neared its 100th Anniversary. She began with a local archive to document each confirmation class and moved on to document the history of the Waco Jewish community as well as Jewish communities across Texas.

In 1980, Gandler became a founding member of the Texas Jewish Historical Society and promoted the interest of Texas Jewish history locally, throughout Texas, and the United States. She was also an active member in organizations such as the National Council of Jewish Women, National Federation of Temple Sisterhoods, Jewish Federation of Waco and Central Texas, and the Greater Waco Interfaith Conference. Her participation often included the role of archivist, board member, or other governing title.

In addition to her religious interests, Gandler used her research skills to further her genealogical searches and help others do the same. In doing so she was able to collect several family histories from the Waco Jewish Community. Gandler was also a patron of the arts and enjoyed travel. She regularly supported the Waco Hippodrome Theatre as a season ticket holder and visited larger cities such as Dallas and New York to attend shows as well.

Ima Joy Gandler died on January 25, 2010. She is buried at Rodef Sholom Cemetery in Waco, Texas.