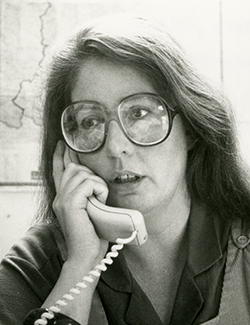 Jane Elizabeth Ellis greatly influenced the work of the Keston Institute, which was founded in 1969 as the Centre for the Study of Religion and Communism to be the “voice of the voiceless’ by reporting on religious persecution under communism, particularly in the Soviet Union and other Warsaw Pact countries. As a teen, Jane became interested in Russia after attending one of Brother Andrew’s rallies urging Christians to take Bibles to the Soviet Union. She taught herself Russian. Ellis joined the Keston staff in 1973 following her graduation from the University of Birmingham in England and immediately founded and almost single-handedly operated Aid to Russian Orthodox Christians (ARC), an organization that provided religious resources to those suffering for their faith in the Soviet Union.

Jane Ellis established herself as one of the leading scholars on religion in the Soviet Union, particularly related to the Russian Orthodox Church. Her work remained invaluable to Keston as she translated documents, published scholarly articles, gathered material for the Keston News Service, and served on the editorial board and later as editor from 1981-1986 of the journal Religion, State, and Society. She also broadcast for the BBC in both English and Russian.

Of particular importance was Ellis’ role in securing a Moscow office for the Keston Institute, which was critical for gaining crucial first-hand knowledge of the religious situation. Ellis utilized her experiences and personal contacts to publish The Russian Orthodox Church: A Contemporary History through Croom Helm in 1986. The work represents her personal connection with Orthodox Christians in the Soviet Union. Ten years later, Macmillan published her follow-up second volume The Russian Orthodox Church: Triumphalism and Defensiveness. She left Keston following its move from Kent to Oxford. Ellis died suddenly in June 1998, having given almost 20 years of dedication to Keston’s mission.

More information about Jane Elizabeth Ellis can be found in the Keston Center for Religion, Politics, and Society and in the Center’s digital archive.