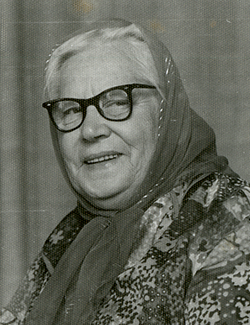 In 1926, American Baptist Peter Vins traveled to Siberia to serve as a missionary. There, he met and married Lydia Zharikova in 1927. The next year, they had their only child Georgi. The secret police gave Peter the choice of giving up his preaching and returning to the United States or renouncing his American citizenship and staying in the Soviet Union. He chose the latter. However, in 1930, he was imprisoned for three years for his preaching. When released, Peter continued, was re-arrested, spent about nine months in jail, and then after his third arrest, was sentenced to 10 years. His wife Lydia was told that Peter died in the labor camp in 1943, but she later learned the authorities had actually executed him in 1937.

During those hard years, Lydia raised their son in the church. In 1959, Nikita Khrushchev, Premier of the Soviet Union, began a sweeping anti-religious campaign. His tactics included the persecution and subsequent arrest of church officials of numerous faiths. Although educated as an electrical engineer, Georgi had followed in his father’s footsteps and was ordained in 1962. The young preacher became active in the unregistered Baptist Church in the Soviet Union despite danger from Khrushchev’s policies. Vins served as the General Secretary of the Council of Churches until his arrest in 1966 following a demonstration by members of the faith in Moscow. In all, Georgi spent eight years in prisons or labor camps.

Lydia Vins became involved in the Council for Prisoners’ Relatives in Kiev in response to her son’s arrest. She served as leader of the Council until her own imprisonment in late 1969. When her son Georgi was exiled to the United States in a prisoner exchange in 1979, his mother followed, along with his children, wife, and niece. Throughout her life, Lydia faithfully served her church and fulfilled her missionary calling by supporting committed Christians who were persecuted by the Communist government and by suffering imprisonment for her own actions of faith.

More information about Lydia Vins can be found in the Keston Center for Religion, Politics, and Society and in the Center’s digital archive.

McIntire, Carl. The Russian Baptists: Twenty Years of Soviet Propaganda: the Hammer and the Sickle on the Platform of the Baptist World Alliance. (A book concerning Georgi Vins and Russian Baptists)