How a Confederate Bushwhacker Became the Lincoln of Our Literature 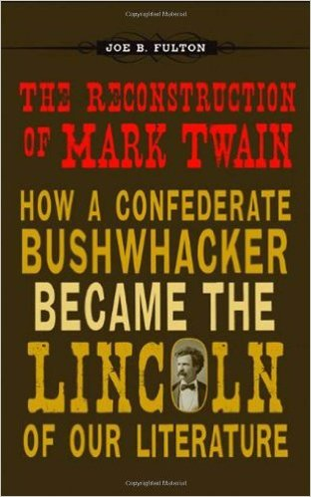 Joe B. Fulton, Professor of English

When Confederate forces fired on Fort Sumter in April 1861, thousands of patriotic southerners rushed to enlist for the Confederate cause. Samuel Langhorne Clemens, who grew up in the border state of Missouri in a slave-holding family, was among them. Clemens, who later achieved fame as the writer Mark Twain, served as second lieutenant in a Confederate militia, but only for two weeks, leading many to describe his loyalty to the Confederate cause as halfhearted at best. After all, Mark Twain's novel The Adventures of Huckleberry Finn (1885) and his numerous speeches celebrating Abraham Lincoln, with their trenchant call for racial justice, inspired his crowning as "the Lincoln of our Literature."

In The Reconstruction of Mark Twain, Joe B. Fulton challenges these long-held assumptions about Twain's advocacy of the Union cause, arguing that Clemens traveled a long and arduous path, moving from pro-slavery, secession, and the Confederacy to pro-union, and racially enlightened. Scattered and long-neglected texts written by Clemens before, during, and immediately after the Civil War, Fulton shows, tout pro-southern sentiments critical of abolitionists, free blacks, and the North for failing to enforce the Fugitive Slave Act. These obscure works reveal the dynamic process that reconstructed Twain in parallel with and response to events on American battlefields and in American politics.

Beginning with Clemens's youth in Missouri, Fulton tracks the writer's transformation through the turbulent Civil War years as a southern-leaning reporter in Nevada and San Francisco to his raucous burlesques written while he worked as a Washington correspondent during the impeachment crises of 1867--1868. Fulton concludes with the writer's emergence as the country's satirist-in-chief in the postwar era. By explaining the relationship between the author's early pro-southern writings and his later stance as a champion for racial justice throughout the world, Fulton provides a new perspective on Twain's views and on his deep involvement with Civil War politics.

A deft blend of biography, history, and literary studies, The Reconstruction of Mark Twain offers a bold new assessment of the work of one of America's most celebrated writers.

"In Our Mark Twain (1910) William Dean Howells called Mark Twain 'the Lincoln of our literature,' and much Train criticism has focused on that outcome; instead, Fulton focuses on the process, fully and ably tracing the way Samuel Clemens moved in his life and his work from a supporter of slavery in the American South to a champion of freedom all over the world." —  Journal of American Studies