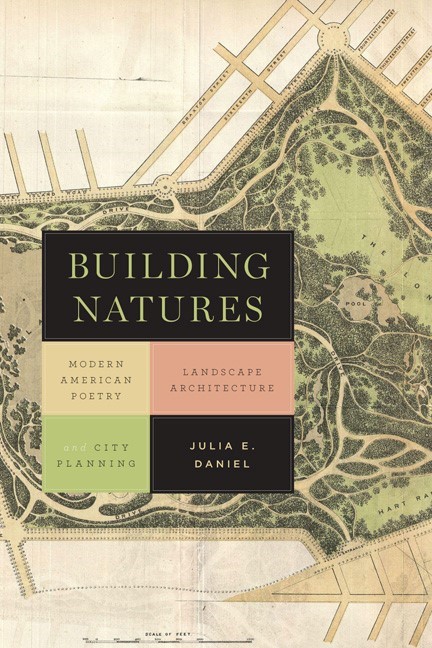 In Building Natures, Julia Daniel establishes the influence of landscape architecture, city planning, and parks management on American poetry to show how modernists engaged with the green worlds and social playgrounds created by these new professions in the early twentieth century. The modern poets who capture these parks in verse explore the aesthetic principles and often failed democratic ideals embedded in the designers’ verdant architectures. The poetry of Carl Sandburg, Wallace Stevens, William Carlos Williams, and Marianne Moore foregrounds the artistry behind our most iconic green spaces. At the same time, it demonstrates how parks framed, rather than ameliorated, civic anxieties about an increasingly diverse population living and working in dense, unhealthy urban centers.

"Daniel’s deftly written and astutely researched book brings together American modernist poetics and landscaped parks as two kinds of 'built natures.' She shows how poems and parks interweave the pastoral and the urban, the organic and the artificial, into an ecological form and content. Daniel’s book goes on a jaunty and studious walk through 'park poems.' In these poems she examines the fantasies and anxieties around the democratic ideals attached to green spaces that sprang up in the modernist period and still resonate today."