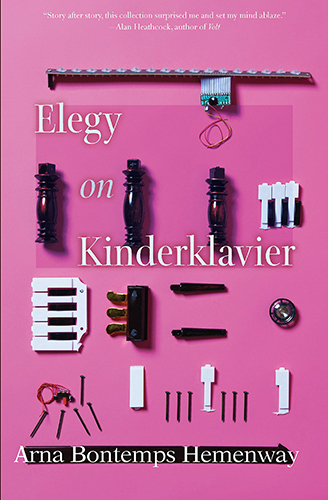 The stories in Elegy on Kinderklavier explore the profound loss and intricate effects of war on lives that have been suddenly misaligned. A diplomat navigates a hostile political climate and an arranged marriage in an Israeli settlement on a newly discovered planet; a small town in Kansas shuns the army recruiter who signed up its boys as troops are deployed to Iraq, falling in helicopters and on grenades; a family dissolves around mental illness and a child's body overtaken by cancer. In the lead story, the moment a soldier steps on an explosive device is miraculously and painfully reproduced, nanosecond by nanosecond. We feel each click and trigger of the metal below his feet, the compression of his toes, and the fading of the sky around him. Arna Bontemps Hemenway's stories feel pulled out of time and place, and the suffering of his characters seem at once otherworldly and stunningly familiar. Elegy on Kinderklavier is a disquieting exploration of what it is to lose and be lost.

"In this impressive debut story collection, Hemenway shows a depth of emotion and intensity that carries the reader from start to finish. These haunting stories deserve a wide audience."

"Death is an imminent, lurking presence in this debut collection of seven stories, which explore the confluence of fate and circumstance that places men in situations of anguish and despair. . . In "The Half Moon Martyrs' Brigade of New Jerusalem, Kansas" and Army recruited is blamed for the mortality rate of his town's soldiers in Iraq. Hemenway's earnest desire to reflect historical forces that tragically impact individual lives is admirable." —Publishers Weekly

“A mother discovers, to her horror, that she cannot muster unconditional love for her 8-year-old son, disfigured out of all recognition by a terminal brain tumor, and disappears on a long trip, leaving the boy’s father by the hospital bedside. . . . shows Hemenway to be a true writer, bearing witness.” —Kirkus Review