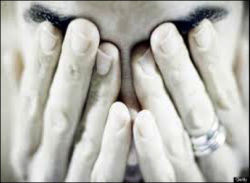 Most people experience an inner drive to improve their performance on some tasks, whether running a faster mile or earning a higher grade. Perfectionism, however, is not a healthy pursuit of excellence. Those who strive for excellence in a healthy way take genuine pleasure in trying to meet high standards. Perfectionism, on the other hand, results in struggles with self-doubt and fears of disapproval and rejection.

MYTH: I wouldn't be as successful if I weren't such a perfectionist.

REALITY: Although some perfectionists are remarkably successful, what they fail to realize is that their success has been achieved despite—not because of—their compulsive striving.

MYTH: Perfectionists get things done, and they do things right.

Perfectionists tend to be "all-or-nothing" thinkers. They see events and experiences as either good or bad, perfect or imperfect, with nothing in between. Such thinking often leads to procrastination, because demanding perfection of oneself can quickly become overwhelming. A student who struggles with perfectionism may turn in a paper weeks late (or not at all) rather than on time with less-than-perfect sentences. A perfectionist employee may spend so much time agonizing over some non-critical detail that a project misses its deadline.

MYTH: Perfectionists are determined to overcome all obstacles to success.

REALITY: Perfectionistic behaviors increase one's vulnerability to depression, writer's block, performance and social anxiety, and other barriers to success. These blocks to productivity and success result from the perfectionist's focus on the final product. Instead of concentrating on the process of accomplishing a task, perfectionists focus exclusively on the outcome of their efforts. This relentless pursuit of the ultimate goal can seriously hinder their efforts.

1. Make a list of the advantages and disadvantages of trying to be perfect.

When you make your own list of costs and benefits, you may find that the costs are too great. You may discover that problems with relationships, workaholism, eating and substance abuse problems, and other compulsive behaviors (plus the accompanying anxiety, feelings of inadequacy, and so on) actually outweigh whatever advantages perfectionism holds for you.

2. Increase your awareness of the self-critical nature of your all-or-nothing thoughts, and how they extend to other people in your life.

Learn to substitute more realistic, reasonable thoughts for your habitually critical ones. When you find yourself criticizing a less-than-perfect performance (whether your own or someone else's), make yourself stop and think about the good parts of that performance. Then ask yourself questions such as: Is it really as bad as I feel it is? How do other people see it? Is it a reasonably good performance for the person(s) and circumstances involved?

3. Be realistic about what you can do.

By setting more realistic goals, you will gradually realize that "imperfect" results do not lead to the punitive consequences you expect and fear. Suppose you swim laps every day for relaxation and exercise. You set yourself the goal of 20 laps, even though you can barely swim 15. If you are a perfectionist, you soon may feel disappointed at your performance and anxious about improving it. Because you're focused on the outcome, you gain little sense of fun or satisfaction from your efforts. You may even give up swimming because you're not "good enough."

A healthier approach would be to tell yourself that 15 laps is good enough for now. So you continue swimming without anxiety. You don't necessarily stop trying to improve, but you swim mainly for exercise and relaxation—for however many laps you can.

4. Set strict time limits on each of your projects. When the time is up, move on to another activity.

This technique reduces the procrastination that typically results from perfectionism. Suppose you must find references for a term paper and also study for an exam. Set time limits. For example: Decide that you will spend only two hours looking up references, then four (and only four) more hours studying for the test. If you stick to your time limits, you won't spend the entire day searching for elusive references, nor try to study late at night when you are too tired to be effective.

5. Learn how to deal with criticism.

Perfectionists often view criticism as a personal attack, which leads them to respond defensively. Concentrate on being more objective about the criticism, and about yourself. Remind yourself that if you stop making mistakes, you also stop learning and growing. Remember that criticism is a natural thing from which to learn, rather than something to be avoided at all costs