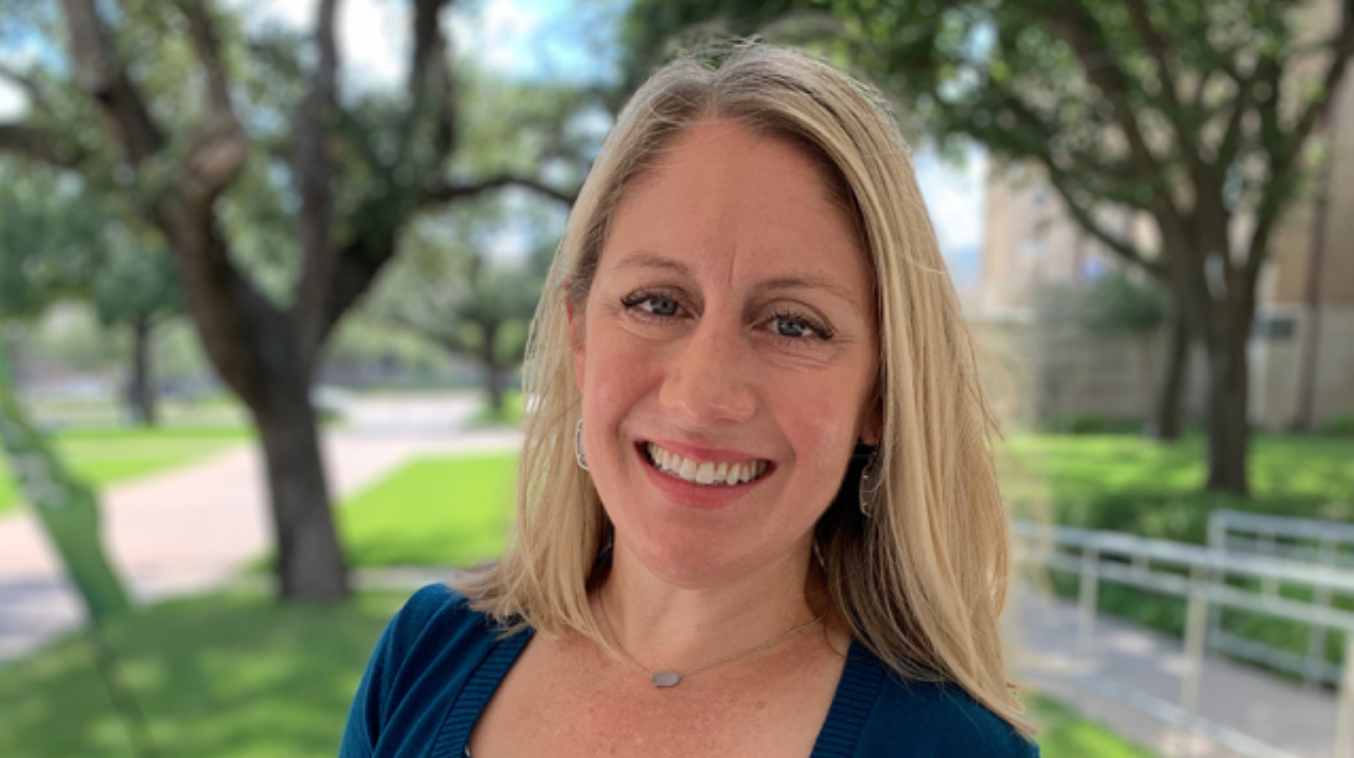 WACO, Texas (May 25, 2021) – Danielle Parrish, Ph.D., professor in the Diana R. Garland School of Social Work at Baylor University, has been awarded a $3.1 million grant by the National Institutes of Health to study the efficacy of risk reduction intervention efforts for young women age 14-17 in the juvenile justice system. The grant will be dispersed over five years, beginning May 2021. The project, titled CHOICES-TEEN: Efficacy of a Bundled Risk Reduction Intervention for Juvenile Justice Females, is an effort to fill gaps in care for at-risk young women in the juvenile justice system.

"I'm really excited and honored to have this opportunity to pursue this research that I’ve had on my heart for many, many years," Parrish said. "This grant will provide the resources to implement a randomized controlled trial to test the efficacy of an intervention that I hope will be able to be used more widely in the U.S. and fill the gaps in services for this population."

Parrish will work with young women in community settings referred by the Harris County Juvenile Justice Probation Department. The project's main focus is on reducing health behaviors associated with the risk of substance-exposed pregnancy, which includes marijuana-exposed pregnancy and alcohol-exposed pregnancy. Young women involved in the juvenile justice system are 3.5 times more likely to have a child compared to non-delinquent youth and 30% have been pregnant one or more times. Additionally, this population experiences higher rates of marijuana and alcohol use than their non-justice involved peers as well as high rates of sexually transmitted infections.

"I think it's important that it is clear that this is a very high-risk, underserved population," Parrish said. "We just haven't made many gains in offering services that are empirically supported that actually improve the wellbeing of these young women and their health. Our short-term goals will be to look at the outcomes of the intervention to see if it's efficacious."

Despite decades of opportunity to develop these services, a recent national survey of probation staff that Parrish recently conducted indicates a continued lack of effective gender-responsive services for this population.

"Dr. Parrish has been committed to improving the health and development of this high-risk adolescent female population throughout her career," said Jon Singletary, Ph.D., dean of the School of Social Work. "It is wonderful to celebrate the NIH award with her. In addition, the grant provides us with the opportunity to serve those most vulnerable. This project truly aligns our research aspirations with the University's mission."

The CHOICES-TEEN program involves four intervention sessions provided by a master's level clinician and a medical doctor specializing in adolescent care, both trained in motivational interviewing. The first session is provided in person, while the subsequent sessions are delivered in a tele-health capacity, accompanied by a mobile health app.

"With this particular intervention — in addition to looking at multiple health risk behaviors at once — we will add a hybrid tele-health aspect to the intervention, which I think can have some major implications for learning about increasing the feasibility of service delivery for a population that might be typically inaccessible because of transportation or living in a rural area," Parrish said.

The research is an integrated and collaborative approach to behavioral health. If the research finds the intervention program to be effective, CHOICES-TEEN could be implemented by a variety of professionals and organizations.

"My hope is that it would be rolled out into settings where a young woman might be coming into contact with the juvenile justice system and diverted into the community setting or on community probation. They could be reached through these settings because we know this population is at risk, but I think this prevention approach could also be translated into other settings like teen health clinics or services provided in partnership with Child Protective Services," she said.


Dr. Parrish has been committed to improving the health and development of this high-risk adolescent female population throughout her career. It is wonderful to celebrate the NIH award with her. In addition, the grant provides us with the opportunity to serve those most vulnerable. This project truly aligns our research aspirations with the University's mission. —Dean Jon Singletary

Parrish, who serves as editor-in-chief of the Journal of Social Work Education, became interested in this at-risk population during the late 1990s, when she served as a mental health clinician working with the Juvenile Justice Detention Center in Fresno, California. In her role with crisis intervention across all units of the detention center, Parrish began to notice that the girls' unit had unmet needs.

"Through my work conducting mental health assessments, I learned their stories. I recognized that these young women had complex overlapping health, mental health and family histories. They were experiencing abuse and neglect that was not being recognized nor addressed. The scant services that were provided for this population were in silos — it was substance abuse, or pregnancy prevention or family intervention, but those things were never provided in an efficient, accessible way where you could address overlapping issues," she said.

Parrish's work aims to improve the wellbeing of the population in a holistic manner by addressing those areas of overlapping risks. If the needs and issues of these young women are not addressed, they can continue into adulthood and have significant impacts on their long-term health and quality of life.


This grant will provide the resources to implement a randomized controlled trial to test the efficacy of an intervention that I hope will be able to be used more widely in the U.S. and fill the gaps in services for this population.

Parrish went on to serve as a post-doc at the Health Behavior Research and Training Institute at the University of Texas at Austin, where she had the opportunity to be involved in research focused on further testing and adapting the CHOICES program, an evidence-based intervention program aimed at reducing alcohol-exposed pregnancies in women aged 18-44. CHOICES has been implemented by the CDC in various settings, including sexually transmitted infection clinics, community health centers, family planning clinics and more. Parrish saw the CHOICES program as a good fit in addressing multiple risks simultaneously of the at-risk adolescent population with a bundled intervention approach, inspiring the CHOICES-TEEN project.

The multidisciplinary team draws together researchers, experts and practitioners from the University of Texas Health Behavior Research and Training Institute — where Parrish is affiliate faculty — including Kirk von Sternberg, Ph.D., co-principal investigator for the project alongside Parrish; the University of Texas Health Science Center, including the McGovern Medical School and the School of Public Health; the University of Houston department of psychology; and the New York University School of Global Public Health among others. Connections with this strong, experienced research team will strengthen and enhance the research potential for not only Baylor, but also students and faculty working with the project, Parrish said.

"I'm grateful to be working at a university that is serious about supporting high-quality research," she said. "I have benefited from Baylor's postdoctoral hiring program, the ongoing support from Dean Singletary to pursue research, including the support of our school's amazing research and grant manager Amber George, and the grant pre-award support from the Office of the Vice Provost for Research — all of them have been essential in obtaining this support from NIH."
Explore More
Featured Meet Briana Fowler, 2022 Alicia Martinez MSW Spirit of Social Work Awardee Jun. 23, 2022 Briana Fowler is a first-generation college student from Austin, Texas, who, in her words, is a work in progress just trying to be a better version of herself every day…so much so that she has a tattoo that says it. And she is the 2022 Alicia Martinez MSW Spirit of Social Work Award winner. The Spirit of Social Work award is intended for students who embody the spirit of social work through engagement in and beyond the classroom, and who demonstrate a commitment to the values of the profession, and last year it was renamed to honor MSW student Alicia Martinez who lost her battle with COVID-19. Alicia was such a shining example of the spirit of social work both in and out of the classroom, and it only seemed fitting to honor her legacy in the profession through this award and judging by the words of one of Briana Fowler’s recommenders, Briana could not have been a better choice for of this award. Featured Q&A with MSW Community Practice Intern of the Year: Geneece Goertzen Jun. 13, 2022 Meet Geneece Goertzen, the 2022 MSW Community Practice Intern of the Year. Geneece is a May 2022 graduate who hopes to work with domestic violence survivors, to work with clergy and congregations around the topic of domestic abuse, and to one day go back to school and get her PhD. Her internship sites included Calvary Baptist Church and the GSSW's Center for Church and Community Impact. #sicem, Geneece! Featured Meet MSW Outstanding Student Trinity Martinez May 12, 2022 Pope Francis once said, “Go and show love to everyone, because your life is a precious mission: it is not a burden to be borne, but a gift to offer.” And when you meet our 2022 MSW Outstanding Student Trinity Martinez, you know no other mantra could better describe her. Trinity is an advanced standing student from San Antonio, Texas, but has lived all over the US and has traveled the world through mission work and study abroad programs, including countries such as Lithuania, Jamaica, Italy and Ireland. All of these experiences contributed to her ability to adapt well to change and exposed her to many cultures and diversity at a formative age. Today, she is a natural leader, committed to speaking up for others and standing up for what she believes. Featured Meet BSW Outstanding Student Micaela Jones May 9, 2022 From a family of educators arises Micaela Jones—emerging social worker. This graduating senior originally thought she would continue the “Jones legacy” as a teacher until she began student teaching and realized that many times, the “home prevented students from being able to thrive in the classroom.” Couple that with a heart for justice, and it became clear that social work was the correct path for Micaela to pursue so that she could impact change at a larger systemic level. It was this passion that earned Micaela the title of BSW Outstanding Student of the year! Research Healthy Bonds for Black Fathers-in-law, Sons-in-law Feb. 9, 2022 What does a healthy relationship look like for a Black son-in-law and his father-in-law? A study aims to answer that question and was published in “Psychology of Men & Masculinities” by University of Maryland School of Social Work’s (UMSSW) Assistant Professor Ericka M. Lewis, PhD, MSW, with Professor Michael E. Woolley, PhD, MSW, and Baylor University Assistant Professor Brianna P. Lemmons, PhD, MSW. Studies on in-laws are far and few between, less so for male in-law relationships, and even less so for Black male in-laws.
Are you looking for more Stories?
All StoriesArchives