Baylor>Community Connection Magazine >Stories>Voices: Justice looks like tearing down the wall between you and Christ

Voices: Justice looks like tearing down the wall between you and Christ 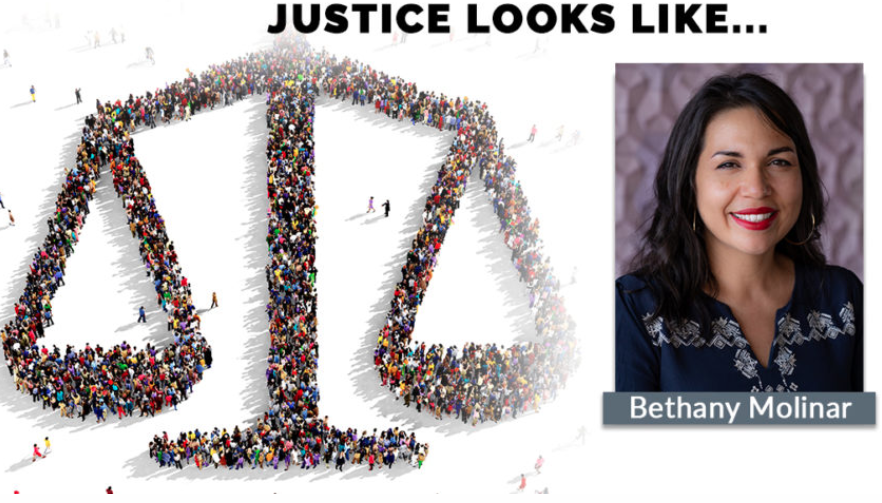 I was born, raised and now live in El Paso. El Paso is a great place to live if you like to run, and I do. My runs regularly take me up to a place where I can see all three cities and states that adjoin each other here.

A few weeks ago, while on a morning run on my usual route, I noticed two things at a distance I hadn’t realized could be seen from my vantage point.

To the left of my viewpoint was a thick black line in stark contrast to the natural colors of the desert landscape. This is a part of the border wall funded by private donations.

Directly across and above this wall is Mount Cristo Rey, which sits on both sides of the international border between the United States and Mexico. The mountain is named for the statue of Christ located at the top of the mountain.

The figure of Christ stands in front of a giant cross. His eyes gaze out over the borderland, and his arms are outstretched with his palms facing outward over three cities and two nations.

Caring for Christ at our border
Over the past few years, our city has been center stage to a humanitarian crisis. We have had front row seats as thousands of asylum seekers have traveled north to seek refuge at our border.

Our brothers and sisters seeking asylum shared with us their stories of what pushed them out of their beloved homelands and stories of the perilous journey that led them to our churches and nonprofits. Their journeys were fraught with danger on their way to the United States.

They also told of the harsh conditions they faced at the hands of federal agents and facilities after they surrendered themselves at our border.

Christ himself arrived at our doors. Churches, nonprofit organizations and individuals in our city responded to his knocking by working together to provide these brothers and sisters with shelter—a place to rest and catch their breath before waiting for their court hearings.

We gave them a clean set of clothes. We fed them. We prayed with them, and they prayed over us. Through this experience, we were ministered to in sanctifying, paradigm-shifting ways through the binding of the Holy Spirit between us and our brothers and sisters.

Christ came to our border. It was tough work. We were stretched thin. But we were motivated by a holy calling to love our neighbors as ourselves.

Caring for our brothers and sisters
When the “Remain in Mexico” policy was enacted, Christ was barred from crossing the border as thousands of asylum seekers were forced to wait for their court hearings for several months in Mexico.

Our brothers and sisters in Mexico responded by opening their doors to their neighbors seeking asylum. They fed them. They clothed them. They gave them shelter. And they continue to minister to many who have nowhere else to turn.

These ministers of Christ are stretched thin. They have become vulnerable to danger from gangs who do not want these churches to provide refuge to asylum seekers. But they still serve, sharing what little resources they may have, because they are compelled by their faith to love their neighbor as themselves—to love and serve Christ who has come knocking at their door.

Walling Christ out
Through a concerted effort by our government, a wall has been placed between us and our brothers and sisters seeking asylum. This wall is physical, but it also is legal, spiritual, emotional.

Our brothers and sisters are returned—by the planeload and in the dead of night—to their home countries where they face certain danger. They have been kept in subhuman conditions and incarcerated for indefinite amounts of time while awaiting their fate.

Their children have been ripped from their arms, scarred and traumatized by the separation of their primary source of comfort and refuge. They have been denied the universally recognized human right of seeking asylum.

When you create a divide that prevents people from seeking refuge—be it through a literal, physical wall or policy or by choosing consciously to do nothing in response to the cries of your brothers and sisters—you also put up a wall between you and Christ.

Your justification for that divide may be fear, a love of country over and above Christ’s command to love your neighbor as yourself, ignorance or racism. But still, the wall remains, and you separate yourself from Christ.

Letting Christ in
But Christ—whose ways are higher and holier than any manmade barrier—stands atop the holy mountain. His eyes are gazing outward toward you beyond the wall you’ve built between you and him. His hands are reaching outward, ready to reconcile you to him. But you have to tear down that wall.

Take heart; have courage. Trust and obey God, and tear down the oppressive manmade structures—be they physical barriers or policies that keep out those who are vulnerable.

Until you do, you wall out Christ.

Bethany Rivera Molinar serves as the executive director of Ciudad Nueva Community Outreach, is the president of the Texas Christian Community Development Network and co-pastors a church that meets in her neighborhood park. She lives, works and worships in her downtown neighborhood in El Paso, with her husband Adrian and their three children. The views expressed are those solely of the author.

First Appeared on Baptist Standard Website
Explore More
BSW Meet Anais Tello: 2022 BSW Spirit of Social Work Recipient Aug. 11, 2022 What is the spirit of social work? By our definition, it is Anais Tello, the 2022 Alicia Martinez BSW Spirit of Social Work Award recipient. Anais, who recently graduated from the Garland School of Social Work with her BSW, is someone you would call a true advocate for others who has used her own story to develop a passion for social work and a deep desire to see prison reforms and improve recidivism. As a child, Anais was introduced to social work through her school social worker who would pray daily for Anais’ safety…it was in this space she developed her calling to help others just as this social worker had helped her. BSW Q&A with BSW Intern of the Year: Maddie Gonzales Jul. 5, 2022 Why did you choose social work? Would you say social work is your “calling”? If so, why? After adopting my sister in 2017, I gained a love for counseling and an admiration for what social workers did for families and clients. I knew that I wanted to do for others what was done for me: comfort, aid, acknowledgment, and so much more. Every day through my classes here at the GSSW I felt affirmed in my choice of major. Not only was the content exciting but has encouraged me to find social work in all aspects of my life. The professors and peers that I have come alongside these four years have also added to my love of Social Work and my experience in growing through education. All have shown what social work is in every facet of living, whether it be through advocation, support of each other, new ideas or perspectives, and so much more. Social work has been such a blessing and constant within my time here at Baylor and I am excited for what is to come through obtaining my MSW. Featured Meet Briana Fowler, 2022 Alicia Martinez MSW Spirit of Social Work Awardee Jun. 23, 2022 Briana Fowler is a first-generation college student from Austin, Texas, who, in her words, is a work in progress just trying to be a better version of herself every day…so much so that she has a tattoo that says it. And she is the 2022 Alicia Martinez MSW Spirit of Social Work Award winner. The Spirit of Social Work award is intended for students who embody the spirit of social work through engagement in and beyond the classroom, and who demonstrate a commitment to the values of the profession, and last year it was renamed to honor MSW student Alicia Martinez who lost her battle with COVID-19. Alicia was such a shining example of the spirit of social work both in and out of the classroom, and it only seemed fitting to honor her legacy in the profession through this award and judging by the words of one of Briana Fowler’s recommenders, Briana could not have been a better choice for of this award. Featured Q&A with MSW Community Practice Intern of the Year: Geneece Goertzen Jun. 13, 2022 Meet Geneece Goertzen, the 2022 MSW Community Practice Intern of the Year. Geneece is a May 2022 graduate who hopes to work with domestic violence survivors, to work with clergy and congregations around the topic of domestic abuse, and to one day go back to school and get her PhD. Her internship sites included Calvary Baptist Church and the GSSW's Center for Church and Community Impact. #sicem, Geneece! Featured Meet MSW Outstanding Student Trinity Martinez May 12, 2022 Pope Francis once said, “Go and show love to everyone, because your life is a precious mission: it is not a burden to be borne, but a gift to offer.” And when you meet our 2022 MSW Outstanding Student Trinity Martinez, you know no other mantra could better describe her. Trinity is an advanced standing student from San Antonio, Texas, but has lived all over the US and has traveled the world through mission work and study abroad programs, including countries such as Lithuania, Jamaica, Italy and Ireland. All of these experiences contributed to her ability to adapt well to change and exposed her to many cultures and diversity at a formative age. Today, she is a natural leader, committed to speaking up for others and standing up for what she believes.
Are you looking for more Stories?
All StoriesArchives