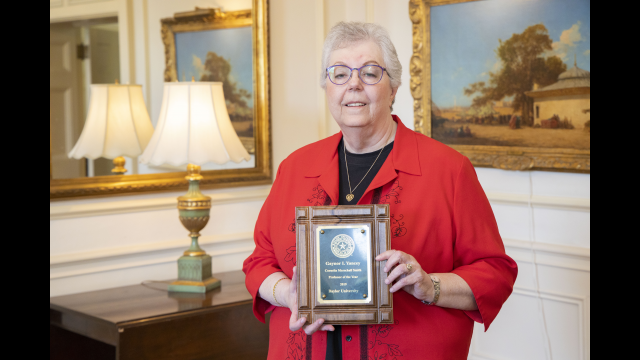 Gaynor I. Yancey, D.S.W., professor of social work, Master Teacher and director of the Center for Church and Community Impact at Baylor University’s Diana R. Garland School of Social Work, was honored April 12 during the annual Academic Honors Convocation as the 2019 Cornelia Marschall Smith Professor of the Year.

Yancey also serves as Faculty Regent and as The Lake Family Endowed Chair in Congregational and Community Health, which allows her to teach and mentor students in both the School of Social Work and George W. Truett Theological Seminary at Baylor. As this year’s professor of the year, Yancey received a $20,000 award and will present a lecture on a topic of her choosing during the next academic year.

The Cornelia Marschall Smith Professor of the Year recognizes a Baylor faculty member who makes a superlative contribution to the learning environment at Baylor through:


“While Dr. Yancey has amassed significant achievements in each of these categories, all of them have been directly and immediately focused on improving the lot of her fellow human beings,” said James Bennighof, Ph.D., vice provost for academic affairs and policy at Baylor. “Her extensive teaching, research and service have been aimed at equipping her students to contribute to others’ benefit in just the way that their teacher has been doing for her entire life.”

In her convocation remarks, Yancey thanked administrators, colleagues, staff, and most of all, the Baylor students “from whom I have learned so much” for their encouragement.

A 1967 graduate of East Texas Baptist University, Yancey earned a master’s degree in religion education from Southwestern Baptist Theological Seminary, a master’s degree in social work from Temple University and her doctorate in social work from the University of Pennsylvania. Her areas of expertise are social welfare policy, congregational and community-based organization and development, poverty and congregation-based delivery of social services to those populations who are marginalized and under-resourced.

Before coming to Baylor in 1999, she served as assistant professor of social work for five years at Eastern University in St. Davids, Pennsylvania, and worked for more than 25 years as a congregational community ministries director in inner-city Philadelphia and for four years as the executive director of the Greater Philadelphia Food Bank.

During her time at Baylor, Yancey has received more than $3.5 million in research and program grants with a focus on church and community collaboration on issues of social justice. She has co-authored a number of scholarly articles and has received a number of awards during her career, including the Marie Mathis Award for Outstanding Life Achievement in Lay Ministry from the Baptist General Convention of Texas and Baylor, the inaugural Clovis A. Brantley Award for Outstanding Service in Christian Social Ministries in the United States and Outstanding Teacher at Baylor in 2006.

Yancey leads Baylor’s Center for Church and Community Impact, which provides research and hands-on training to congregations, denominational agencies and religiously affiliated organizations that bridge the divide between church and community.

Yancey is a member of First Baptist Church of Woodway, where she serves as a Bible study teacher for adult women.

In her students’ words

During the award presentation, Bennighof read testimonials that students shared in letters about Yancey and her teaching:

The Cornelia Marschall Smith Professor of the Year honor was inaugurated 16 years ago by the Office of the Provost and is named for Cornelia Marschall Smith, Ph.D., a 1918 Baylor biology graduate who earned a master’s degree from the University of Chicago in 1925 and her doctorate from Johns Hopkins University in 1928. She was a professor of biology at Baylor from 1940 to 1967, chair of the biology department from 1943 to 1967 and director of Strecker Museum from 1943 to 1967. She retired in 1967 but maintained an office in Armstrong Browning Library to assist charitable causes. In 1980, Baylor honored Smith with an endowed chair known as The Cornelia Marschall Smith Professorship in Biology. She was celebrated among her colleagues, students and alumni for fine teaching, generous mentoring and her many interdisciplinary interests. She was a lively and continuing contributor to the Baylor intellectual community until her death on Aug. 27, 1997, at age 101.

Nominations for the award come from all faculty, students and alumni, and the recipient of the award is chosen from among the nominees by a committee of four faculty members and Bennighof. This year’s committee included Julie K. DeGraffenreid, Ph.D., associate professor of history; Marcie H. Moehnke, Ph.D., senior lecturer of biology; H. Stephen Gardner, Ph.D., professor of economics and The Herman Brown Endowed Chair in Economics; and Jay Yoo, Ph.D., associate professor of family and consumer sciences.
Explore More
BSW Meet Anais Tello: 2022 BSW Spirit of Social Work Recipient Aug. 11, 2022 What is the spirit of social work? By our definition, it is Anais Tello, the 2022 Alicia Martinez BSW Spirit of Social Work Award recipient. Anais, who recently graduated from the Garland School of Social Work with her BSW, is someone you would call a true advocate for others who has used her own story to develop a passion for social work and a deep desire to see prison reforms and improve recidivism. As a child, Anais was introduced to social work through her school social worker who would pray daily for Anais’ safety…it was in this space she developed her calling to help others just as this social worker had helped her. BSW Q&A with BSW Intern of the Year: Maddie Gonzales Jul. 5, 2022 Why did you choose social work? Would you say social work is your “calling”? If so, why? After adopting my sister in 2017, I gained a love for counseling and an admiration for what social workers did for families and clients. I knew that I wanted to do for others what was done for me: comfort, aid, acknowledgment, and so much more. Every day through my classes here at the GSSW I felt affirmed in my choice of major. Not only was the content exciting but has encouraged me to find social work in all aspects of my life. The professors and peers that I have come alongside these four years have also added to my love of Social Work and my experience in growing through education. All have shown what social work is in every facet of living, whether it be through advocation, support of each other, new ideas or perspectives, and so much more. Social work has been such a blessing and constant within my time here at Baylor and I am excited for what is to come through obtaining my MSW. Featured Meet Briana Fowler, 2022 Alicia Martinez MSW Spirit of Social Work Awardee Jun. 23, 2022 Briana Fowler is a first-generation college student from Austin, Texas, who, in her words, is a work in progress just trying to be a better version of herself every day…so much so that she has a tattoo that says it. And she is the 2022 Alicia Martinez MSW Spirit of Social Work Award winner. The Spirit of Social Work award is intended for students who embody the spirit of social work through engagement in and beyond the classroom, and who demonstrate a commitment to the values of the profession, and last year it was renamed to honor MSW student Alicia Martinez who lost her battle with COVID-19. Alicia was such a shining example of the spirit of social work both in and out of the classroom, and it only seemed fitting to honor her legacy in the profession through this award and judging by the words of one of Briana Fowler’s recommenders, Briana could not have been a better choice for of this award. Featured Q&A with MSW Community Practice Intern of the Year: Geneece Goertzen Jun. 13, 2022 Meet Geneece Goertzen, the 2022 MSW Community Practice Intern of the Year. Geneece is a May 2022 graduate who hopes to work with domestic violence survivors, to work with clergy and congregations around the topic of domestic abuse, and to one day go back to school and get her PhD. Her internship sites included Calvary Baptist Church and the GSSW's Center for Church and Community Impact. #sicem, Geneece! Featured Meet MSW Outstanding Student Trinity Martinez May 12, 2022 Pope Francis once said, “Go and show love to everyone, because your life is a precious mission: it is not a burden to be borne, but a gift to offer.” And when you meet our 2022 MSW Outstanding Student Trinity Martinez, you know no other mantra could better describe her. Trinity is an advanced standing student from San Antonio, Texas, but has lived all over the US and has traveled the world through mission work and study abroad programs, including countries such as Lithuania, Jamaica, Italy and Ireland. All of these experiences contributed to her ability to adapt well to change and exposed her to many cultures and diversity at a formative age. Today, she is a natural leader, committed to speaking up for others and standing up for what she believes.
Are you looking for more Stories?
All StoriesArchives