Meet the 2018 GSSW Alumna of the Year Dana Smith 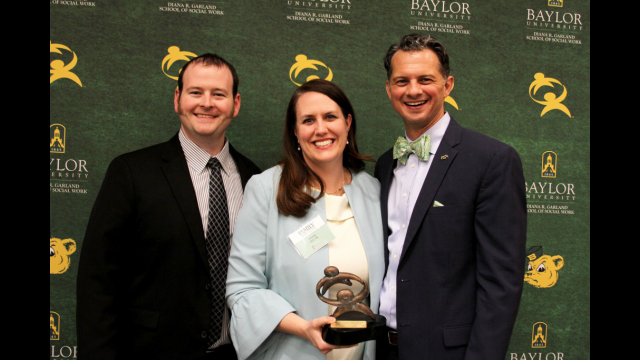 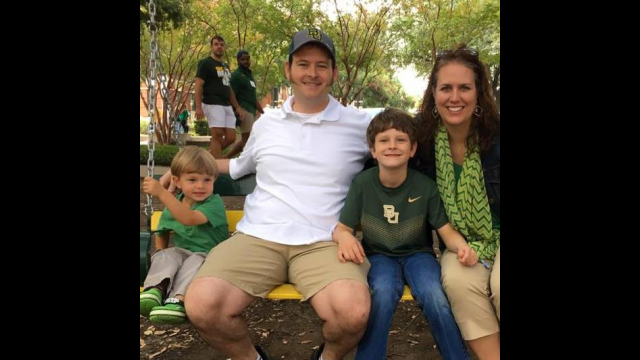 “What if you could change the system so the women you worked with [at the Christian Women’s Job Corps] were never in their situations or circumstances in the first place?” Dr. Rob Rogers said, years ago in a meeting with Capstone student. “What policies could have been created to change the systems affecting them?”

This helped to change the direction of that student’s life. This conversation helped plant the macro social work seed in the heart of the Garland School of Social Work’s 2018 Alumna of the Year, Dana Smith, and that seed has only grown and flourished for nearly 15 years!

Originally from Missouri, Smith is a two-time graduate of Baylor University. She earned BSW in 2004 and her MSW in 2005. She came to Baylor knowing she wanted to be part of a helping profession, thinking she would major in education and work with ESL students, but true ESL programs, the kind she wanted to be a part of, were hard to come by at that time. She felt as though she was not where she needed to be.

Then someone pointed her toward an Introduction to Social Work class, and like so many have said before her, it felt like home. She knew she had found where God wanted her to be. This class served as her light bulb moment when she realized how many more kids she could help doing this type of work…she also learned how, “social work could fulfill that desire to volunteer and minister appropriately” by helping her understand the whole person, the whole child. And she has been helping vulnerable children all over Texas and across the country ever since.


Smith, an active member of the National Association of Social Workers, has spent nearly her entire career advocating for systemic change that positively affects the lives of children and families. She works diligently to empower children to shape their future through education.

Upon graduation in 2005, Smith found Communities In Schools, an agency working directly in 2,300 schools in 25 states and the District of Columbia…building relationships that empower students to stay in school and succeed in life. When she first applied, she knew she didn’t want an administrative job. She wanted to be a hands-on site coordinator at a school campus. So, that’s what she did for several years at Communities In Schools of North Texas, personally working with 90 students each school year, in the beginning.

She continued to work for CIS North Texas in a number of capacities: Parent Educator, Director of Community Investments and Volunteerism, Director of Program Research and Grant Development and eventually Chief Executive Officer serving more than 147,000 students. While serving as CEO at CIS of North Texas, Smith wrote and submitted more than 40 grants, with a 97% award rate and was successful in expanding programs across six additional school districts resulting in 29 additional programs serving 400% more students. Then in 2016, after five years as CEO, Dana was recruited into the CIS National Office in Washington D.C. as the Director of Organizational Development. Through the national office, she now provides support for organizations serving over half a million students…and with her love of macro, she feels like it’s the perfect place to be!

Smith recently heard Rham Emanuel (the mayor of Chicago and former Chief of Staff for President Obama) speak at a conference in Washington, D.C. He said something she has been preaching her entire career, and it is this: “For children to live up to their full potential, adults have to own their full responsibility.” Yes!! Yes, she said, this is what we need in society. In general, children are born into families and their circumstances. They do not have a choice about where or how they live.

“All I could think was, YES, that is what I’ve been trying to do,” Smith said. “This is exactly where the struggle exists. Whether it was when I was working one on one a student to help them gain confidence and get the resources they desperately needed so they could reach their full potential or when I was sitting down with legislators on Capitol Hill advocating for public education and begging them to see how our students are our future, I was only one piece of the puzzle.”

Smith, an active member of the National Association of Social Workers, has spent nearly her entire career advocating for systemic change that positively affects the lives of children and families. She works diligently to empower children to shape their future through education. She contends that we need more social workers out there who can help adults be capable of taking on their full responsibilities and can help children without a capable adult reach their full potential.

“We need social work students to step out into the world and help curate new research on best practices and help us advocate for the least of these,” Smith added. “We need them to run good organizations so clients can receive the best services possible, and we need them to help change the world by empowering one client at a time.”

Every day Smith works tirelessly to make a difference in the lives of those she serves, whether it be a student or the staff serving that student five states away. She is a firm believer that if you make a difference in one person’s life, there are tidal waves that can come from it.

“When I was first notified about this award, I was floored,” Smith said. “I’m just so honored. I’ve always been proud to be a Baylor Social Work alumna and so humbled to learn from professors such as Diana Garland, Gaynor Yancey and Rob Rogers—talk about macro social work! They help you become a better version of yourself, which models what we should be doing as social workers … empowering our clients to be better versions of themselves. They are truly changing the world! The school is full of professors such as these, and this award somehow, to me, means they’re saying ‘hey, you too are doing this.’ It is truly humbling, and it brings tears to my eyes to think somebody would think I am sufficient in that capacity!”

Dana Smith is an exceptional example of what it means to be the Garland School of Social Work’s Alumna of the Year.
Explore More
Featured Meet Briana Fowler, 2022 Alicia Martinez MSW Spirit of Social Work Awardee Jun. 23, 2022 Briana Fowler is a first-generation college student from Austin, Texas, who, in her words, is a work in progress just trying to be a better version of herself every day…so much so that she has a tattoo that says it. And she is the 2022 Alicia Martinez MSW Spirit of Social Work Award winner. The Spirit of Social Work award is intended for students who embody the spirit of social work through engagement in and beyond the classroom, and who demonstrate a commitment to the values of the profession, and last year it was renamed to honor MSW student Alicia Martinez who lost her battle with COVID-19. Alicia was such a shining example of the spirit of social work both in and out of the classroom, and it only seemed fitting to honor her legacy in the profession through this award and judging by the words of one of Briana Fowler’s recommenders, Briana could not have been a better choice for of this award. Featured Q&A with MSW Community Practice Intern of the Year: Geneece Goertzen Jun. 13, 2022 Meet Geneece Goertzen, the 2022 MSW Community Practice Intern of the Year. Geneece is a May 2022 graduate who hopes to work with domestic violence survivors, to work with clergy and congregations around the topic of domestic abuse, and to one day go back to school and get her PhD. Her internship sites included Calvary Baptist Church and the GSSW's Center for Church and Community Impact. #sicem, Geneece! Featured Meet MSW Outstanding Student Trinity Martinez May 12, 2022 Pope Francis once said, “Go and show love to everyone, because your life is a precious mission: it is not a burden to be borne, but a gift to offer.” And when you meet our 2022 MSW Outstanding Student Trinity Martinez, you know no other mantra could better describe her. Trinity is an advanced standing student from San Antonio, Texas, but has lived all over the US and has traveled the world through mission work and study abroad programs, including countries such as Lithuania, Jamaica, Italy and Ireland. All of these experiences contributed to her ability to adapt well to change and exposed her to many cultures and diversity at a formative age. Today, she is a natural leader, committed to speaking up for others and standing up for what she believes. Featured Meet BSW Outstanding Student Micaela Jones May 9, 2022 From a family of educators arises Micaela Jones—emerging social worker. This graduating senior originally thought she would continue the “Jones legacy” as a teacher until she began student teaching and realized that many times, the “home prevented students from being able to thrive in the classroom.” Couple that with a heart for justice, and it became clear that social work was the correct path for Micaela to pursue so that she could impact change at a larger systemic level. It was this passion that earned Micaela the title of BSW Outstanding Student of the year! Research Healthy Bonds for Black Fathers-in-law, Sons-in-law Feb. 9, 2022 What does a healthy relationship look like for a Black son-in-law and his father-in-law? A study aims to answer that question and was published in “Psychology of Men & Masculinities” by University of Maryland School of Social Work’s (UMSSW) Assistant Professor Ericka M. Lewis, PhD, MSW, with Professor Michael E. Woolley, PhD, MSW, and Baylor University Assistant Professor Brianna P. Lemmons, PhD, MSW. Studies on in-laws are far and few between, less so for male in-law relationships, and even less so for Black male in-laws.
Are you looking for more Stories?
All StoriesArchives