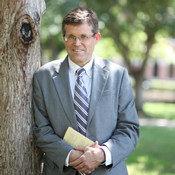 Virgil and Ovid, Hellenistic and Roman art, cultural presence of Rome from the Renaissance to the present

Alden Smith is a scholar of Virgil and Augustan poetry. He enjoys reading both Greek and Latin with his students and holds office hours on Friday afternoons in the “Lounge of Destiny” in the Classics Department. There he gets to know his students better. He serves the Honors College as Associate Dean. He has published on Latin poetry and prose, and especially enjoys teaching Cicero’s Pro Caelio and other speeches of that great orator. He is thankful that he has had the opportunity to study under great educators such as Zinaida Sprowles, Philip Lockhart and Philip Ambrose. While his main publications are on the works of Ovid and Virgil, Smith has been known also to work on Greek poetry from time to time, as well as the interesting Swedish writer Axel Munthe.