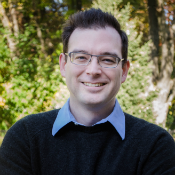 Before coming to Baylor, Dr. Hackworth taught courses at the University of Iowa, and The Ohio State University.

I have broad interests: myth, religion, reception, critical theory, historiography, etc. I’m especially interested in moments where texts have audiences. To borrow Clifford Geertz’s “Thick Description” and Michael Scott’s “Middle-Level Analysis” of space -- I am interested in texts that exist in what we could call “Thick Spaces.” Delphi offers excellent opportunities for examining texts as performances, with histories, spatial contexts, participants, literary and epigraphical description, as well as abundant material contextualization.

My current projects include articles on Dionysian allusion in a hymn to Apollo, competitive instrumental music as a model for mythical innovation, and the political rhetoric of importing history into performed myth. My dissertation was an edition and study of Athenaios’ song in praise of Apollo, a late 2nd century BCE epigraphic text from Delphi.