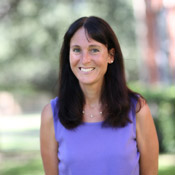 Dr. Hejduk came to Baylor in 2003 after 10 years on the faculty at the University of Texas at Arlington.

“I came to Baylor both because of the outstanding Classics department (see below!) and because I was thrilled at Vision 2012, the drive to make Baylor a truly Christian research university. This struck me then, and still does now, as the most exciting experiment in Higher Education in the past fifty years. Though the university has certainly undergone some growing pains (which is what happens when you try to make a real change, especially in academia), I feel that it has remained true to this vision and that Classics, especially, becomes stronger every year.”

Dr. Hejduk’s main research interest is Latin poetry, especially as it sheds light on Roman religion and on women in the ancient world; she is particularly fascinated by the phenomenon of intertextuality, both ancient and modern. Her current project focuses on acrostic conversations.

What are the strengths of the Classics Department?

"The Baylor Classics Department is a vibrant community united by its love of the ancient world. We have a national reputation as one of the largest and best departments in the country, with huge undergraduate enrollments in our language classes (for beginning Greek and Latin, often triple or quadruple those at top-ten programs). Our upper-level offerings are correspondingly rich and diverse. The faculty are all extremely dedicated both to their subject and to their students, who tend to be among the brightest and most successful at the university. Many of our graduates have gone on to win choice fellowships at Ivy League and other excellent graduate programs; many have shared their passion for the ancient world by becoming Latin teachers; others have gone on to top law schools and medical schools. And we know how to throw a great party: thousands of high school students and dozens of teachers have enjoyed our annual Latin Day, and in Spring 2014 hundreds of Classicists from all over the country came to our campus for the annual meeting of CAMWS."