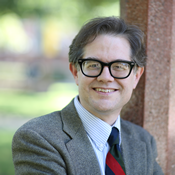 Dr. Burris’ interests are broad but center around poetry, especially Greek lyric. He is also a Faculty Fellow in Ancient Greek Literary Papyri at the Baylor Institute for Studies of Religion and serves as a Scholar-Mentor for the Green Scholars Initiative.

In addition to his work on Pindar, Dr. Burris focuses on the production of edited texts and commentaries of various papyri from Green Collection, involving undergraduate researchers under aegis of Green Scholars Initiative