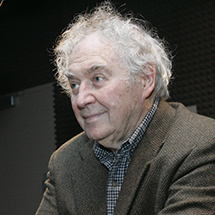 Legendary printmaker Pozzatti was born in Telluride, Colorado, and began studying art at the University of Colorado. However, World War II interrupted his education. During the war, he served under Gen. George Patton and was part of the Battle of the Bulge. After his military service, he returned to Colorado, where he earned his bachelor and master’s degrees.

Pozzatti’s works hang in some of the best-known art collections in the United States, including the Art Institute of Chicago, New York City’s Museum of Modern Art, the Boston Museum of Fine Arts, the National Gallery of Art and the Philadelphia Museum of Art. On an international level, his works have been exhibited at the Museum of Art in Sydney, Australia, the Puskin Museum in Moscow, Bibliotheque Nationale in Paris and the Toronto Museum of Art.

He is a former recipient of a Fulbright grant, a Guggenheim Fellowship, a U.S. State Department Cultural Exchange Grant and two Ford grants, among others. He was elected to the National Academy of Design in 1981 and won the Indiana Governor’s Art Award that same year. His printmaking work also has been the subject of the book Rudy Pozzatti by Norman Geske and a public television documentary.