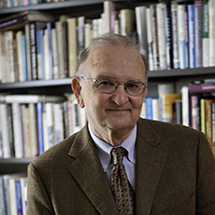 A specialist in the social and environmental history of the American West, Dr. Elliott West is the author of seven books and more than 100 book chapters, articles, and book reviews in national history journals and publications.

West has been honored with several national awards for his book, The Contested Plains: Indians, Goldseekers and the Rush to Colorado (1998), including the Caughey Prize from the Western History Association, Best Work of Research Non-Fiction by PEN Center USA West, the Francis Parkman Prize from the Society of American Historians, Best historical Non-Fiction on the West by Western Writers of America, and the Ray Allen Billington Prize from the Organization of American Historians. West also has won awards for The Way to the West: Essays on the Central Plains (1995) and Growing Up With the Country: Childhood on the Far-Western Frontier (1989).

Though his scholarship has been recognized nationally, West also has been honored with several awards for teaching, including the 2001 Charles and Nadine Baum Award as University Teacher of the Year at Arkansas and 1995 Arkansas Professor of the Year from the Carnegie Foundation for the Advancement of Teaching. For the past seven years, West has taken part extensively in national programs to bring new approaches and recent research to teaching history in public schools.