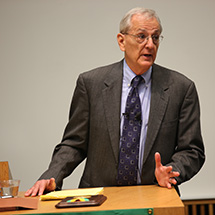 Dr. Allen J. Matusow, 2012 Finalist,  the W.G. Twyman Professor of History and associate director for academic programs at the James A. Baker III Institute for Public Policy at Rice University. He joined the Rice faculty in 1963 and has served in several roles, including dean of humanities at Rice from 1981-95.

Matusow earned his B.A. from Ursinus College in 1958 and received his M.A. in 1959 and Ph.D. in 1963, both from Harvard University. His areas of interest include the foreign policy of Nixon and Kissinger, post World War II American foreign policy and U.S. history 1945-1974.

On teaching leave from Rice for the 2010-11 academic year, Matusow currently is writing a book on Jimmy Carter and the Cold War. Among his additional books are Nixon's Economy: Boom, Busts, Dollars, & Votes (University of Kansas, 1998), The Unraveling of America: A History of Liberalism in the 1960s (Harper & Row, 1984) and Farm Policies and Politics in the Truman Years (Harvard Univ., 1967).

Matusow also has received numerous honors for teaching, including the Brown Award for Superior Teaching from Rice in 1969, 1970, 1975 and 1982; Nicholas Salgo Distinguished Teacher Award in 1979 and 1999; Piper Professorship Award in 1980; and Brown Honorary Life Teaching Award from Rice in 1985. He was a Fellow at the Charles Warren Center at Harvard from 1970‐1971 and was honored with a Fellowship at the Lyndon Baines Johnson Library in 1974 and a summer stipend from the National Endowment for the Humanities in 1974.