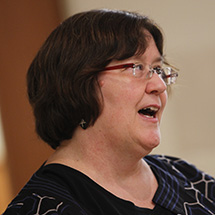 Dr. Heather Macdonald, 2012 Finalist, has served as Chancellor Professor at The College of William and Mary since 2006. She joined the William & Mary faculty in 1983 and has served in various roles, including geology department chair from 1999 to 2004 and again from 2005 to 2008, and dean of undergraduate studies of arts and sciences from 1994 to 1996. She currently co-directs the school’s marine science minor program.

Macdonald is known for her award-winning work with the National Association of Geoscience Teachers (NAGT) “On the Cutting Edge” project that helps geoscience faculty stay up-to-date with both geoscience research and teaching methods. The workshop series and website combine to provide professional development opportunities, resources and opportunities for faculty to interact on-line and in person with colleagues around the world who are focused on improving their teaching. This work is supported by grants from the National Science Foundation (NSF) Division of Undergraduate Education.

Macdonald and her team have been honored with awards for the On the Cutting Edge website, including the 2010 Science Prize for Online Resources in Education (SPORE), given by the American Association for the Advancement of Science (AAAS), and 2009 Best Website Award from the Geoscience Information Society.

A Fellow of the Geological Society of America, Macdonald has been honored numerous times for teaching, including the 2009 Neil Miner Award presented by the National Association of Geoscience Teachers each year to one individual for exceptional contributions to the stimulation of interest in the earth sciences; the 2003 State Council of Higher Education in Virginia (SCHEV) Outstanding Faculty Award; 1992 BEST (Biggs Earth Science Teaching) Award, given by the Geological Society of America annually to one faculty member in his/her first 10 years of teaching; the 1990 Thomas Jefferson Teaching Award from the College of William and Mary; 1989 William and Mary Alumni Fellowship for Excellence in Teaching; and the 1979 Stanley A. Tyler Award for Excellence in Teaching by the department of geology and geophysics at the University of Wisconsin.

Macdonald has served in leadership positions for numerous professional organizations, including the American Geophysical Union, Association for Women Geoscientists, American Geological Institute, Science and Technology for Children (STC) Advisory Committee, National Research Council Committee on Undergraduate Science Education and Committee on the Preparation of Science & Mathematics Teachers and National Association of Geoscience Teachers, where she served as president from 1995-96. She also served on the editorial board of the Journal of Geoscience Education from 1997-2000.