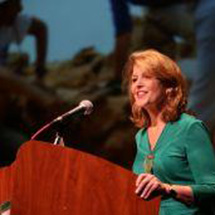 Dr. Joan Breton Connelly earned her B.A. in classics from Princeton University in 1976, a master's degree in classical and Near Eastern archaeology in 1979 and her Ph.D. in 1984, both from Bryn Mawr. She served as assistant dean of the Undergraduate College and lecturer in classical and Near Eastern archaeology at Bryn Mawr from 1982-84, before joining the faculty of art history and classics departments of New York University in 1986, where she currently serves as professor of classics and professor of art history. Since 1990, she has served as director of the NYU Yeronisos Island Excavations and Field School, Cyprus. In 2002, she received a citation from the Ministry of Communication and Works for her contribution to the exploration and preservation of Cypriot cultural heritage.

Connelly has earned several teaching awards, including the 2007 Archaeological Institute of America Excellence in Undergraduate Teaching Award, 2002-04 Lillian Vernon Chair for Teaching Excellence at NYU and 1988 Golden Dozen Teaching Award from NYU. She also chairs the Archaeological Institute of America Committee on Excellence in Undergraduate Teaching. She has received numerous academic honors and fellowships and was appointed by President George W. Bush to the Cultural Property Advisory Committee, U.S. Department of State, Bureau of Educational and Cultural Affairs, from 2003-2011. Her book, Portrait of a Priestess: Women and Ritual in Ancient Greece (Princeton University Press, 2007), was honored with the James R. Wiseman Book Award from the Archaeological Institute of America and the Professional/Scholarly Press Award for Best Book in Classics and Ancient History by the Association of American Publishers.