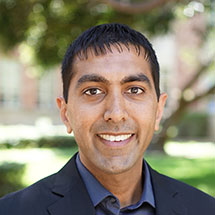 Garg has earned numerous awards for his teaching and research, including California’s U.S. Professor of the Year Award from the Carnegie Foundation for the Advancement of Teaching in 2015 and the Elias J. Corey Award for Outstanding Original Contribution in Organic Synthesis in 2017. He was named a Fellow of the Royal Society of Chemistry and received the group’s Merck Award in 2016. He received a Guggenheim Fellowship that year as well.

Garg’s research specializes in the field of synthetic organic chemistry. His research group has made breakthroughs that have solved long-standing problems in chemistry, and much of the chemistry he and his colleagues have discovered is now used by practitioners in the pharmaceutical industry seeking to make the medicines of tomorrow. He has published more than 75 peer-reviewed scientific manuscripts and two patents while at UCLA, and he has been invited to give more than 170 lectures worldwide. Garg is a popular teacher of undergraduate-level organic chemistry and challenges his students to overcome their pre-fabricated perceptions of the subject. He is known to engage students by showing them the relevance of organic chemistry in everyday life using online tutorials and giving them the opportunity to create organic chemistry music videos, all while teaching them to solve extraordinarily difficult problems. His class is one of the most popular classes at UCLA and was featured in the magazine LA Weekly as being one of the best in the city of Los Angeles.

For more on Professor Garg and his research and educational activities, visit his website:  http://garg.chem.ucla.edu