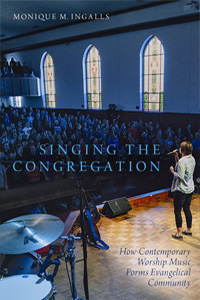 Drawing from theoretical models in ethnomusicology and congregational studies, Singing the Congregation reconceives the congregation as a fluid, contingent social constellation that is actively performed into being through communal practice--in this case, the musically-structured participatory activity known as "worship." "Congregational music-making" is thereby recast as a practice capable of weaving together a religious community both inside and outside local institutional churches.

Congregational music-making is not only a means of expressing local concerns and constituting the local religious community; it is also a powerful way to identify with far-flung individuals, institutions, and networks that comprise this global religious community. The interactions among the congregations reveal widespread conflicts over religious authority, carrying far-ranging implications for how evangelicals position themselves relative to other groups in North America and beyond.