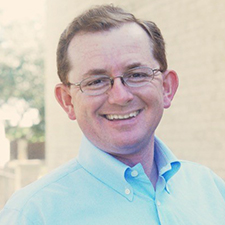 John is the Organist and Choirmaster at St. Philip’s, having previously served as Director of Music for St. Paul’s Episcopal Church and Organist for Temple Rodef Shalom, both in Waco. John graduated Baylor University with a Bachelor degree in Church Music with Organ Emphasis and later a Master of Music in Church Music degree. He is a member of the American Guild of Organist, Organ Historical Society, Pi Kappa Lamba, The Hymn Society of the United States and Canada, and The Royal School of Church Musicians.

John has also participated in the Doctorate of Musical Arts program from the University of Texas at Austin, where he studied with Judith and Gerre Hancock. During his undergraduate years at Baylor University, John served two seasons as Organist for the Baylor University Concert Choir as well as organist for several different University events.

As a musician for sacred service, John has excelled at the Art of Improvisation. He has sat as a board member for Baylor University’s Center for Christian Music Studies. As a hymn writer, Blackburn’s hymns have been sung around Texas and the Southeast, including at a National Convention of the Organ Historical Society in Washington, D.C. in July of 2011.

He has also serve the American Guild of Organists by serving the Central Texas Chapter first as Dean, and later as Secretary and has served on the board of Schola Cantorum of Texas, a professional choir based in Fort Worth. He has served as a lecturer, teacher and performer for several Pipe Organ Encounters, a national effort to teach both youth and adults how to play the organ.

John is active in the community. He is a member of Rotary International, serves as president of the school board of St. Philip’s School, and aids various organizations through charity concerts including Habitat for Humanity, the Beeville Vineyard, The Texas Water Mission and Rotary International’s “End Polio Now” Campaign.