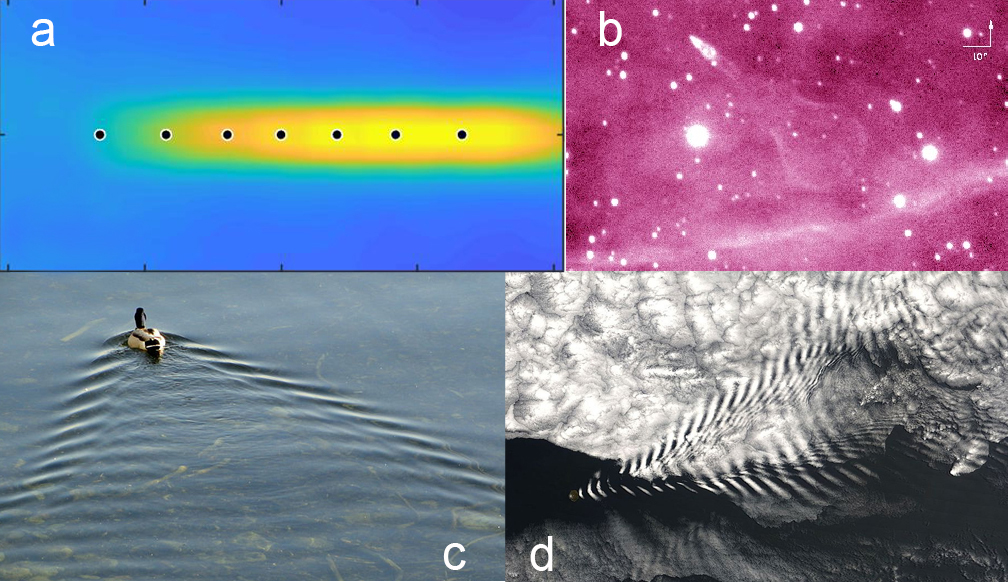 (a) Charge density distribution in the wake of dust grains in a plasma with ion flow (CASPER), (b) Guitar Nebula wake behind a neutron star (Palomar Observatory), (c) Water wake behind swimming duck, (d) Wave cloud pattern in the wake of the IIe Amsterdam (NASA)

The research within CASPER investigates the wakes formed by positively charged ions flowing past negatively charged dust particles in a complex plasma. The micron-sized particles in a complex (dusty) plasma have the ability to self-organize into a wide variety of structures. As such, complex plasmas are an excellent system for studying dynamic effects such as structure formation, as they allow direct observation at easily accessible space and time scales (using a high speed camera with a microscope lens), while providing experimentally controlled damping and flow rates. Much like drafting cyclists, dust particles trapped in the flowing plasma tend to line up downstream of each other. An investigation of the modes of oscillation and structural transitions in a complex plasma can provide insight into the dynamics of other finite systems which can’t be easily imaged, such as molecules consisting of several atoms.

The primary objective of this research is to investigate the effect of the plasma wakefield interaction on the self-organization, dynamics, and phase transitions in self-assembled dust structures within a complex plasma environment. This research merges computational and experimental techniques.

This research is funded by the National Science Foundation through grant PHY-1707215.