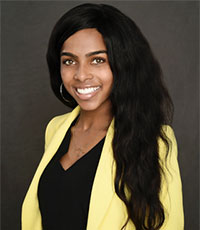 Kennedy was a Journalism, Public Relations major with a Media Management minor who was able to work with CBS News during the summer of 2019 in New York City. She was a features intern who was tasked with assisting producers with shoots across New York, logging interviews, archiving footage for segments, and co-producing the intern newscast. Kennedy found this internship through LinkedIn, and applied for the sole purpose to take her broadcast journalism skills to the next level. She was able to learn more about the industry as a whole and earn insight about what her future career is going to look like.

Kennedy recommends that if you are applying for internships that you should start as early as possible, organizing all of the internships that you may want to apply to, and start looking into factors such as letters of recommendation and the due date for each specific internship. After graduating in December, Kennedy became an Emmy Award Winning Weekend Morning Anchor and news reporter for KEZI 9 News in Oregon.

“Utilize the resources at the Career Center! There are so many helpful tools there that can help you prepare for your next steps, whether that be for an internship or post-graduation job.”