HSB > Center for Professional Selling > About Us > History 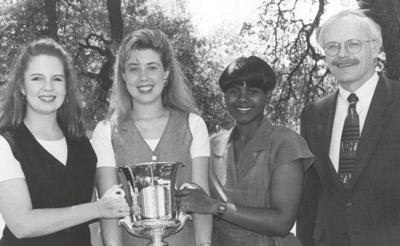 Dr. Bill Weeks and the winners of the first National Collegiate Sales Competition, held at Baylor University in the 1990's

In January 1985, Baylor's Center for Professional Selling was established as the first Sales Center in the nation. Former Dean Richard S. Scott and Dr. Charles (Stan) Madden envisioned a center that would differentiate Baylor's marketing department from others.

"When I came to Baylor in 1983 as chair of the Marketing Department, Dean Richard Scott and I discussed early on that the Marketing Department needed to find a way to connect with the business community and establish some differentiation for the department to help students find jobs," Madden said. "We discussed several possible areas that could be the focus of a new center and hit on Selling."

With the inception of Baylor's Center for Professional Selling, many students were eager to be a part of the groundbreaking venture.

As the Center progressed and grew, it became evident that expanding contact with people in the sales profession would increase the benefits to the students.

"I will always remember how much help many of those early advisors were in putting programs in place that benefited the students," Cooper said. Cooper and others in the department were pleased with the Center's impact, both on- and off-campus. Businesspeople, faculty members and students became involved with the Center in many ways.

One of the first projects that exposed students to the world of sales involved an experiment conducted with Baylor's student newspaper, The Lariat. "(Professional Sales) students began selling Lariat advertising and soon The Lariat was billing more ad sales than ever before in the history of the paper," Cooper said. "The students were earning 15 percent commissions on their sales, which, of course, eventually became such large amounts that the program was discontinued - not by us."

By 1991, the Center had made a name for itself in academia and in industry. Dr. William (Bill) Weeks served as director for the Center from 1991 to 2005 and continued to teach until he retired in 2018. Weeks made many contributions to the Center over his years as director, including the expansion of the Advisory Board to include people in executive sales positions and those representing national companies. He also helped develop a functional Sales Lab for recording role plays, providing students with additional ways to develop their sales skills.

Celebrating the Past, Looking Forward

Under the direction of executive director Dr. Andrea Dixon, the Center continues to bring the mission of promoting professional selling and sales management to life by establishing and growing relationships with industry, ensuring integrity as a key focus for student development, maintaining a commitment to excellence and building a pathway to success for the selling profession and for the Center's partners.

As the first Center for Professional Selling in the nation, the Hankamer School of Business and Baylor University celebrates with its graduates, Advisory Board members and colleagues and looks forward to many more decades of education excellence and success.

"It is truly an honor to lead Baylor's Center for Professional Selling," Dixon said. "I have so much respect and admiration for all of the Center's previous leaders. The opportunity that lies before us today is clearly the result of perseverance, dedication and passion of those who built the first 25 years of the Baylor program."