For the past 15 years, Mat Hawkins has proved his mettle as an aviator, logician and instructor in the United States Air Force. As he finishes his online MBA, he feels more confident than ever to lead teams of impact. 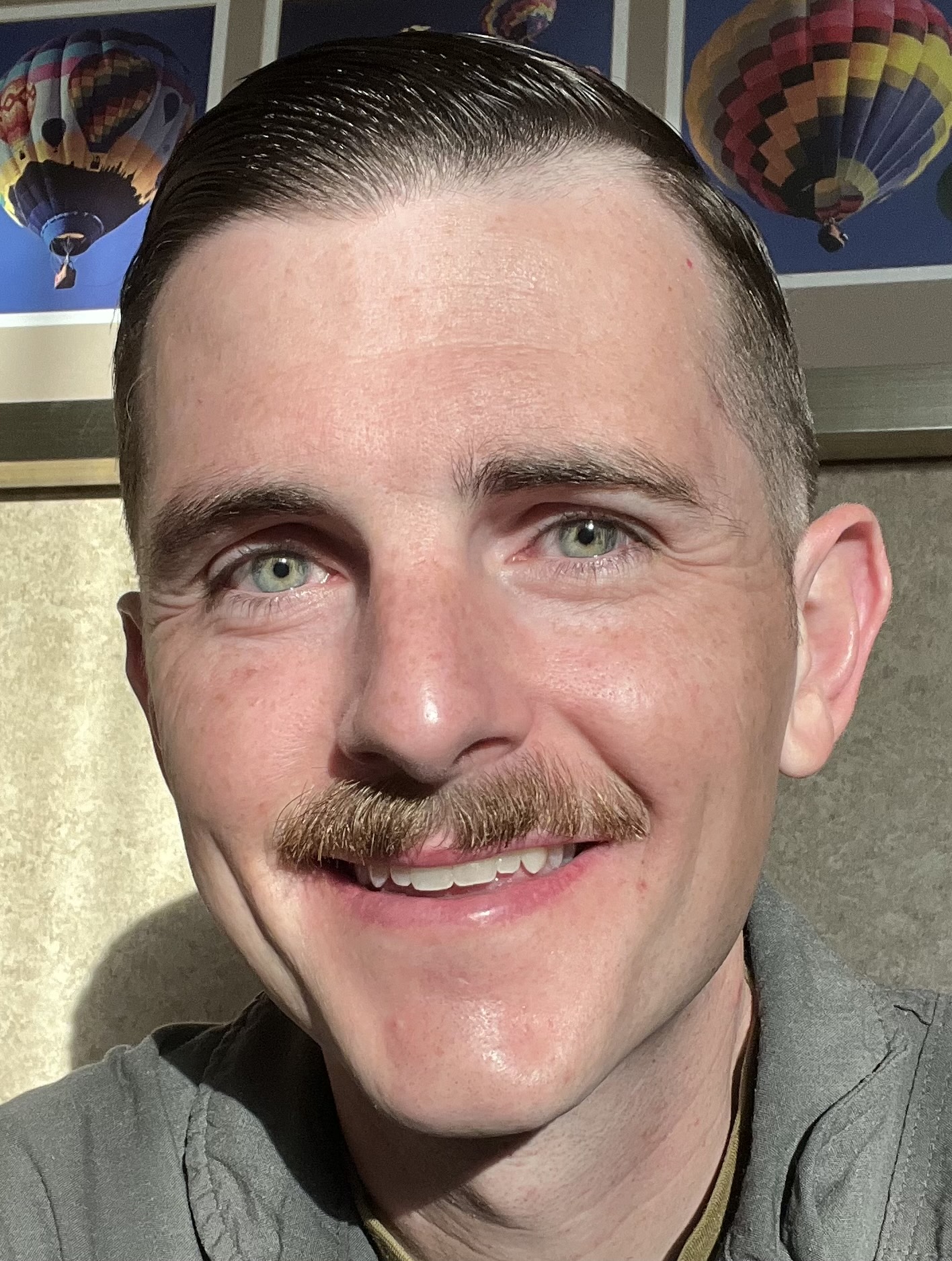 Mat HawkinsMat Hawkins will never forget the first time he rode in a helicopter. At 19 years old, the airman was invited to join more experienced Air Force colleagues in a combat search and rescue unit to gain a firsthand perspective of how they operated in the air. “Going 150 miles per hour with the door open in a helicopter is like being a boot thrown around a washing machine,” he said. “You either love it or hate it.”

Mat loved the experience so much that it set the trajectory for the next 15 years of his career in the Air Force. While he built an impressive toolkit of technical and leadership skills over the years, he was humble enough to recognize there were still gaps in his knowledge. He enrolled in Baylor’s online MBA program all the way from Japan and call himself a “better employee and better human” because of the experience.

Moving Through the Ranks

Ironically, Mat's first flight ever was the one he took from his home in Tampa to San Antonio for basic training in the Air Force. "I didn’t know what I wanted to do with my life, but I always felt called to serve,” he said.

His original plan was to earn a degree from the University of South Florida and enter as an officer through the ROTC program. But not long after enrolling, he began to feel paralyzed by the knowledge that he was staring down debt for a future that was entirely undefined. “In college, I was all thrust and no vector, as we say in the Air Force,” he said.

He transferred to a local community college and immediately felt suffocated in the small-town environment. Four years earlier than expected, he decided to enlist in the Air Force at the age of 18. After undergoing basic training and technical training, he was stationed in Okinawa, Japan, in an Aircrew Flight Equipment trainee role. He spent his days installing and maintaining survival kits, helmets, night vision goggles and other equipment for the aviators who underwent local rescue missions.

Watching how these aviators worked together during his first helicopter ride imparted an exciting new vision for the future. “I realized then, at 19 years old, that I would do anything to become them,” he said.

After more than five years of working in support roles in Japan and Nevada, Mat had put in his time. Finally, he became an official aviator and moved to the Washington, D.C., area to join a special missions unit as a flight engineer. During a typical mission, he explained, there are two pilots in the front of a helicopter and a flight engineer and aerial gunner in the back.

After several years in D.C., Mat moved to New Mexico to teach graduate level flight training for four years. In the middle of that post, he spent a year in Afghanistan, where he helped train, advise and assist members of the Afghan military.

“Both emotionally and in terms of time, that experience was both rewarding and taxing,” Mat said. “It was heartbreaking to witness the Afghan military face the same struggles year after year.”

His deployment ended in late 2018, three years before the Taliban would seize power once again, but he joined the effort led by Jack McCain IV—son of the late Senator John McCain—and other colleagues in providing assistance to Afghan allies seeking to flee Afghanistan. He was proud to witness the organizational skills of the counterparts he had helped train when it mattered most.

In a full-circle moment, Mat moved back to his first posting in 2019. There, in Okinawa, he worked in the same hangar only feet away from his first desk. This time, though, his responsibilities have varied considerably. Over the past three years, he has moved back and forth between support roles on land and aviator roles in the air. On land, the position that challenged him most as a leader was the role of Flight Chief. In this capacity, he was responsible for the advancement and well-being of 28 aviators. He oversaw training, promotion, combat readiness and rehabilitation, but he was also involved in the aviators’ lives to the point of knowing their spouses’ birthdays and what grade their kids were in.

“I have never worked as hard as when I was in the flight office,” he said. “It highlighted the impact I could make by helping people in a support role.”

Since the spring, he has worked in a dual role as an Operations Superintendent, which involves helping run operations for the 80-person 33d Rescue Squadron of the Air Force, and as an Evaluator Special Mission Aviator. Out of the aircraft, the most rewarding part of his role is playing a part in the development and promotion of others. In the aircraft, he savors the challenge of interpreting data and acting on it quickly to save lives. Amid stifling heat and violent vibration inside the helicopter, he and his team make split-second decisions in an unusually challenging environment. On any given day, they could rescue a surfer swept out to sea or a military vessel in distress—or even act as a MEDEVAC to deliver U.S. and foreign military members to nearby hospitals. “There is nothing more rewarding than finding someone is in their darkest hour and getting them out of that situation,” he said.

As Mat rose through the ranks, he began searching for opportunities to continue learning and burnishing his leadership credentials. “I was looking to gain a mix of technical and soft skills that would make me more useful for future service,” he said.

He knew an online MBA program would fit the bill, but it was a challenge to identify a highly ranked program that would be flexible enough for him to complete from Japan. He enrolled in Baylor’s Online MBA program in 2020 and quickly realized he made the right decision.

“The program is incredibly conducive to the schedule of an active-duty service member,” he said. “I felt like the program staff understands how difficult it is to earn a degree as a full-time employee, especially as someone working overseas.”

While Mat has filled his toolkit with an abundance of technical skills over the years, his MBA classes demonstrated he still had more to learn. He credits the advanced analytical skills he gleaned from his coursework for making him more effective at maximizing resources in an operational context. “Now, I am better able to make informed recommendations about how we allocate our time and money as a unit,” he said.

He has also benefited from communications classes in more ways than one. In addition to writing background papers and case studies, he is often called upon to deliver speeches and lectures with short notice. He has noticed his comfort level rise throughout the MBA program. When it comes to working on global teams, he has also gained confidence in his ability to coordinate complex tasks with people from diverse backgrounds.

“When you are running a multi-hour, multi-mobile simulation to solve a problem, you cannot be an autocrat,” he said. “You need to be able to identify team strengths and weaknesses and increase cooperation. My MBA experience took me to the next level in that respect.”

Mat will become eligible for retirement at the end of his next assignment, but he has no plans to retire anytime soon. “My MBA prepared me to succeed in almost any discipline because I have fewer holes in my foundation,” he said. “I am ready now to use my skills at higher and higher levels of responsibility.”

Are you an active duty service member looking for a flexible, supportive online MBA program? Learn more about Baylor online MBA program by clicking here or fill out the form below to speak with an admissions advisor.


In accordance with § 3601.108 and 5 CFR 2635.807(b), Mr. Hawkins has not been authorized by the United States Air Force (USAF) nor the Department of Defense (DoD) to present material to be viewed as the agency's position. The views presented in this writing are those of the speaker or author and do not necessarily represent the views of DoD, the USAF or any of its components