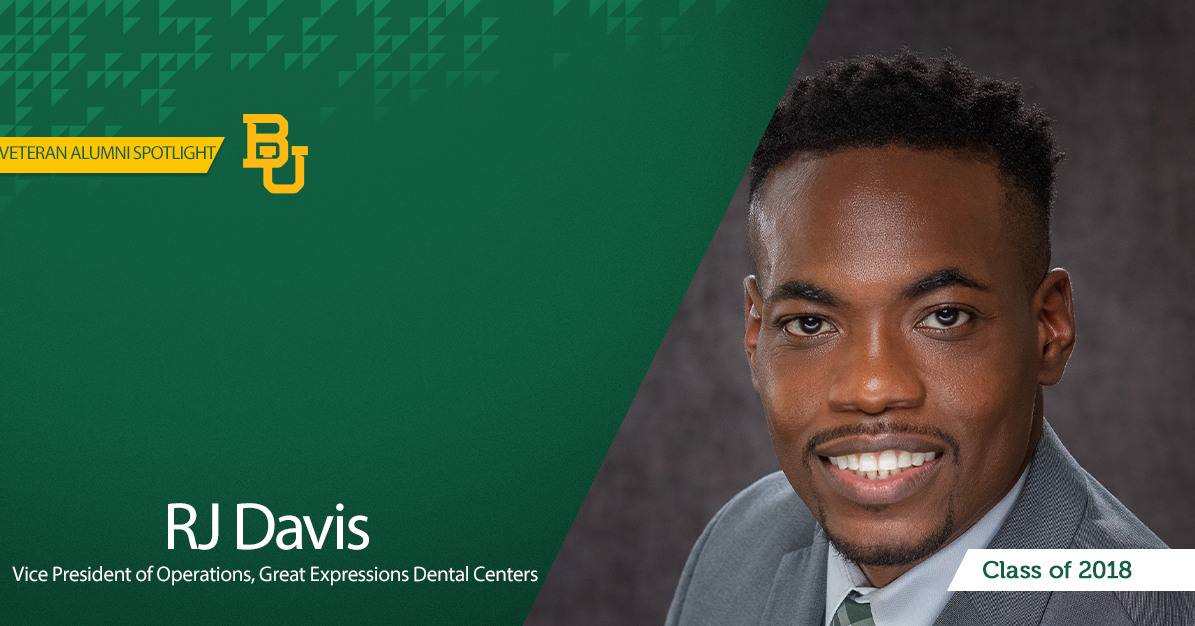 RJ Davis is a Navy veteran, healthcare operations expert and Executive MBA alum. Davis recently shared some insights regarding his career transition from military to civilian and how earning an EMBA with Baylor helped him capitalize on his unique background.

Davis served eight years in the Navy as a corpsman and surgical technologist. He completed two deployments and spent time aboard the U.S.S. Theodore Roosevelt and in Spain overseeing various military medical operations.

After completing his military service, Davis moved to Texas and began work with as a project manager with the Children’s Health medical network in Dallas. After several years, he set a specific goal: earn a director-level title. Realizing that he might need some additional leverage in order to achieve this goal, Davis began his search for an MBA program.

Why a Baylor MBA?

Like Ryan Kuithe, a fellow Navy veteran, leadership was another key area of growth for Davis in the Executive MBA program. He stated that faculty members “embodied” leadership. Davis grew in his ability to be a true leader “by thinking deeply throughout an entire process”

The EMBA program in Dallas offers a concentration in Healthcare Administration, which was crucial for Davis as someone already in the industry and looking to grow further. He shared that the insight of faculty members who are healthcare experts was extremely beneficial. One particular professor, Glenn Robinson, who worked as a hospital system CEO for many years even coached Davis on how to build better relationships with the physicians he manages – vital for success in an operations role.

It’s no surprise to Davis that a Baylor EMBA helped him achieve his goal of becoming a director. In fact, he took on a new role as director of operations for Methodist Health systems partway through his time in the program. Davis shared that the hiring team saw the Baylor MBA as a huge value-add and a significant factor in his successful candidacy.

Now, five years after completing his degree, Davis is taking the next step in his successful career as the vice president of operations for Great Expressions Dental Centers.

In addition to his career goals, Davis said that Baylor was also the perfect choice to earn his MBA because of his veteran status. He had initial concerns about exploring advanced education as a veteran without an extended civilian career. However, once Davis became immersed in the cohort model of the Baylor EMBA, he felt right at home.

Fellow classmates “took extra time to reach out and help keep one another on track”. Davis says he never lacked for “advice and help and coaching from peers”. Between the efforts of faculty, classmates, professional program staff and the Baylor VETS office, Davis “never felt unprepared when walking into a new challenge.”

When asked if he would recommend Baylor to fellow veterans, Davis laughed and gave an enthusiastic “yes!” He shared that Baylor “communicated well” and that he “never felt ignored”. “In many situations as a veteran, you feel like you’re on the back burner,” Davis said. “But Baylor never made me feel like I was just another number. There was no problem that went unsolved. [They] made me feel part of the community. Baylor is my home.”

Are you a veteran wondering if an Executive MBA program could help you become a leader at the highest level? Reach out for a one-on-one consultation with our admissions advisers. Complete the form below, and our team will contact you directly.