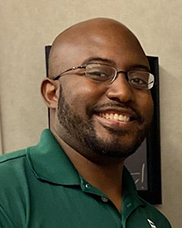 Jeremy Ransom (EMBA 2017) is a Marine Corps veteran and a Business Development Manager at DLA Piper, a global corporate law firm with offices throughout the Americas, Europe, the Middle East, Africa, and Asia. He recently graduated with a J.D. from the Mitchell Hamline School of Law and will sit for the bar in February 2022.

Jeremy Ransom is 33 years old. He has a bachelor’s degree, two master’s degrees, and a law degree, all of which he earned after serving five years in the US military. In the past half-decade alone, Jeremy founded, and subsequently divested himself of, CTX Capital, a successful private investment bank, plus stepped up as the Executive Director of the Baylor Angel Network. All of it, he says, is just the beginning. By the time he turns 34, Jeremy hopes to be practicing law full-time—"something,” he says, “I’ve wanted to do since I was a Marine.”

The reason Jeremy didn’t pursue law right after undergrad? He’d just gotten married and his wife was expecting their first child. Determined to put his young family first, Jeremy thought law school, with its particularly high-stress demands, was “out of reach.” He values education, however, and wanted to keep learning, so he looked at programs in Austin, where the couple had settled. Reading about what Baylor alumni were doing with their lives sold him on the Hankamer School’s Executive MBA program—that, and what Jeremy calls the “Baylor ethos,” which emphasizes Christian values.

“I didn’t get the Christian component in my undergrad at a public school,” Jeremy explains, “and heading into what can be a muddy, unethical world of business, basing your business practices upon your faith is important.”

His faith is ultimately what got him through the program—all while working full-time and raising his infant daughter. On a typical day, Jeremy would head into the office by 9:00 a.m., work until class at 6:00 p.m., get home around 10:00 p.m., and crack open his laptop. While his wife and baby girl slept in the next room, he read course assignments and worked on writing the business plan that would eventually become CTX Capital.

According to Jeremy, “The only way to make it through is to—as we said in the Marine Corps—'embrace the suck.’ You work for a purpose, not just for the sake of working, but because there’s something bigger than yourself driving it. Whether God is calling you to be there, you’re doing it for your family, or you told yourself 10 years ago that you were going to go to grad school but never did, there’s no excuse anymore. It’s a matter of how badly you want to get where you want to go.”

Jeremy took inspiration from his classmates and faculty mentors, several of whom were also military vets. “Regardless of where we were in our careers or our backgrounds, we found a way to learn from one another, a way to take our experiences and bring them to the classroom in a way that was less theoretical and more applicable,” he says. “I learned from people who had ‘been there, done that’ for 10, 15, 30 years—that alone was well worth the price of admission.”

Now that he’s finally found his way back to law, Jeremy believes every other experience, including his Baylor MBA, has led him to this moment. After he passes the bar, he hopes to work with venture-capital-level companies across Texas—"Series A funded companies that are growing, expanding, and thinking about international expansion,” he clarifies. Which he will be uniquely qualified to do, first by having gone through the process himself with CTX Capital and second, by having mentored other founders through the Baylor Angel Network. “I learned a lot at the Hankamer School about mergers and acquisitions and corporate finance. This, coupled with the direct experience and knowledge I’ve accumulated at my current employer, DLA Piper, as well as in law school … it’s a skill set that a lot of attorneys don’t have if they go to work straight out of law school.”

Additionally, Jeremy credits the Christian principles instilled in him at Baylor; principles he now considers important to pass on to his daughter, 7, and son, 5 months, born two months premature. On that traumatic experience, Jeremy remarks, “My faith definitely carried me through.” But in all things, he adds, “When you put God first, you’ll be successful at the end of the day.”

Jeremy and his wife still fly a Baylor flag outside their home, and he always wears Baylor tees when he’s traveling on business.