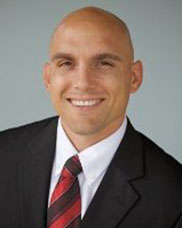 Born and raised in South Africa, Ryan Mouritzen immigrated to the United States in 1997 to attend university at Virginia Tech. There he studied Computer Information Systems, and upon graduation immediately landed a job as an IT programmer for Synterac Inc. After a 5-year stint in San Diego, he moved to Austin to found a logistics company. In 2013, Spectrum Enterprise (then Time Warner Cable) hired Ryan as a project manager. The rest is history. As the Director of Program Management for Spectrum, today he leads a team in charge of customer communication and fiber installs for all of Texas and the West Coast.

While Ryan Mouritzen had considered pursuing an MBA for years, the timing never seemed right. He sat down with his mentor one morning and asked, “You have your MBA, right? Was it worth it? Should I do it?”

“Don’t talk to me again until you’ve applied,” the man responded.

Newly inspired, Ryan paid visits to Baylor’s Hankamer School of Business and the McCombs School of Business at UT-Austin. He ultimately chose Baylor for its location (one exit north of his office) and schedule (with classes on Monday nights, he wouldn’t miss a single one of his kids’ Saturday sporting events).

Fifteen years removed from the academic environment, Ryan at first found Baylor’s Executive MBA program “daunting,” explaining, “It took a couple of months to figure out my schedule. I had to force myself to read and study again.” In the end, however, he calls it “the most fulfilling endeavor I’ve ever undertaken,” citing the program’s extensive applications to both the entrepreneurial and corporate worlds.

“Basically,” says Ryan, “there were a lot of ‘a-ha’ moments, where I could look back at different sales, project management, or operations obstacles I’d faced and realize: Shoot, I should I have done it this way.”

Ryan was surprised by how much support he received from the program—especially its director, Stacy McCracken. Describing her as a “mom figure,” he says, “She was there to teach you when you weren’t behaving, and support you when you were struggling.” Given that every student in Ryan’s cohort was simultaneously balancing family, career, and school, Ryan found Baylor’s willingness to go the extra mile “exceptionally comforting,” as it allowed him to “focus on the job at hand.”

Since graduating in May 2018, Ryan hasn’t seen the degree advance his career—yet. But that’s because he’s playing the long game, preparing for a more senior position in 5-7 years. In the meantime, he utilizes what he learned at Baylor (“a different way of thinking and speaking”) to set himself “apart from the pack—to be ready for success when it arrives.”

“The question,” he reiterates, “is not What will the MBA do for me? but How can I use the MBA to achieve my goals?”

To future students, Ryan offers the following advice: Know your Why. “When things get tough—and they will—understand why you’re doing it. You will question at 3:00 a.m. Why the hell am I doing this? and at that moment,” Ryan challenges, “try to remember that higher education is a gift. We are incredibly blessed to be able to put ourselves through an arduous program like an MBA.”

When asked if he misses the program and the people in it, Ryan says, “Every day. I loved it and I wish I was still in it now.”