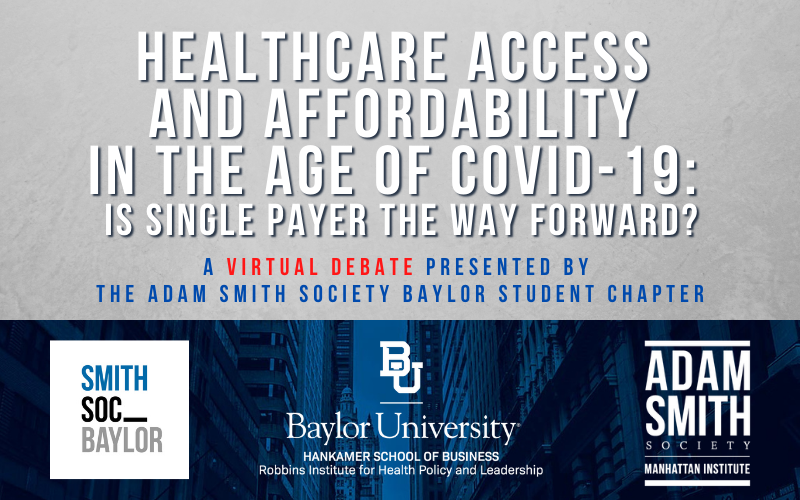 Sally C. Pipes is President, CEO, and Thomas W. Smith Fellow in Health Care Policy at the Pacific Research Institute. Prior to becoming president of PRI in 1991, she was assistant director of the Fraser Institute, based in Vancouver, Canada.

In January 2020, Encounter Books published Ms. Pipes' latest book, False Premise, False Promise: The Disastrous Reality of Medicare for All, which reached #1 on Amazon's Health Law bestseller list. The book exposes the problems with "Medicare for All" plans or stepping-stone approaches to M4A, details the horrors of single-payer systems in Canada and the U.K. with real-life stories, and offers a workable vision for delivering the affordable, accessible, quality care Americans are seeking.

Ms. Pipes is a frequently called upon guest for media interviews, speeches/debates, and meetings with policymakers, sharing her ideas for solutions that would provide better quality and access to health care while lowering costs. In September 2019, she and her debate partner won a prestigious Intelligence Squared debate, arguing against the motion, "Replace Private Insurance with Medicare for All."

Ms. Pipes published over 400 op-eds (including reprints) in publications nationwide in 2019, including her regular columns for FoxNews.com, Forbes.com, and the Washington Examiner's "Beltway Confidential" blog.

In April 2018, she received an honorary Ph.D. from Pepperdine University's School of Public Policy for her work on health care reform.

A former Canadian, Ms. Pipes became an American citizen in 2006. She is married to Professor Charles R. Kesler.

Steffie Woolhandler, M.D., MPH is a primary care doctor, a Distinguished Professor at The City University of New York's Hunter College and a Lecturer in Medicine at Harvard Medical School, where she was formerly Professor of Medicine.

She has earned degrees from Stanford University, Louisiana State University at New Orleans, and University of California at Berkeley, and an honorary degree from Harvard.

A native of Louisiana, she completed an internal medicine specialty training at Cambridge Health Alliance/Harvard Medical School. She completed a research fellowship in General Internal Medicine at Harvard, and a Robert Wood Johnson Health Policy Fellowship at the Institute of Medicine in Washington, DC. She has published more than 200 journal articles, reviews, chapters and books on health policy and is a leading advocate of non-profit national health insurance for the United States

She has served as an (unpaid) advisor to several political leaders, most recently to Senators Bernie Sanders and Elizabeth Warren. In 1986, she co-founded Physicians for a National Health Program.

He is a Fellow in the American College of Healthcare Executives (ACHE) and board member of the Commission on the Accreditation of Health Management Education (CAHME). Dr. Kim's research interests include federal health program evaluation, graduate educational outcomes, and competency development and assessment. Dr. Kim resides in Woodway, Texas with his wife, Emme, and three daughters.

Mr. Joel T. Allison retired from his position as President and CEO of Baylor Scott & White Health in February 2017 after more than four decades in healthcare management. For more than two decades, he worked to grow the system from a few hospitals, outpatient surgery centers, and other entities in the DFW metroplex to 48 hospitals and more than 1,000 patient access points across north and central Texas.

Mr. Allison is a Fellow of the American College of Healthcare Executives (ACHE) and has received numerous recognitions during his career for his outstanding leadership and commitment to the healthcare field. Most recently, he was honored with the American Hospital Association's 2017 Award of Honor in recognition of his exemplary contributions to the health and wellbeing of our nation. In 2010, he was inducted into the Baylor "B" Association's Wall of Honor and in 2013 he received the George W. Truett Distinguished Church Service Award from the Baylor Alumni Association.

During his career, Mr. Allison served on the boards of Baylor University, the Healthcare Leadership Council and United Surgical Partners, International. He also chaired the United Way of Metropolitan Dallas Board, the Dallas Regional Chamber Board, and the Dallas Citizens Council Board. He has also been involved in many other state and local organizations.

He and his wife of 49 years, Diane, have a daughter, two sons, and six grandchildren.