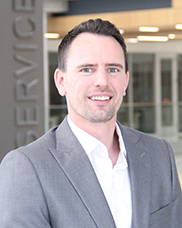 Justin Pfaff was seventeen years old when a car accident changed his life forever. The vehicle he was driving rolled over in North Dakota, and by the time he was found, Justin had suffered severe frostbite to all four extremities. At the hospital, doctors told him he was likely to lose both arms below the elbow and both legs below the knee. Teenage Justin made a decision: He would undergo an experimental treatment to see if blood flow to his limbs could be restored. Miraculously, it worked, and while Justin still lost a few fingers and toes, the damage was far less traumatic than it could have been.

In the years following this pivotal experience, Justin made another decision: He would go to medical school and study what he terms “a little-known niche of health care called prosthetics and orthotics.” Prosthetics involves the replacement of a missing limb with an artificial limb (a prosthesis). Orthotic devices enhance or support a limb—think braces and splints.

At the University of Texas Southwestern Medical School, Justin found that prosthetics and orthotics not only “fit [his] skillset,” but allowed him to “give back” in the way he’d wanted to ever since medical personnel saved his life and limbs. For almost a decade after graduating, he served in a direct patient care role at Hanger Clinic, taking care of individuals who had lost limbs due to cancer, diabetes, or accidents. “But eventually it got to the point,” Justin says, “where I also fell in love with building clinics and establishing growth patterns and working on strategies to better serve patients in underserved areas.” He knew that to advance into a leadership role would require “filling in the gaps” left by his “strictly clinical background”—and that, according to Justin, is what led him to Baylor.

Once Justin decided to pursue an EMBA, he knew he needed a program that prioritized work-life balance. With a current five-year-old and a nine-month-old at home, it was important that whatever program he chose was both prestigious and well-regarded and would allow him to be a dad to his kids. Even though he’d been out of school for fourteen years, Justin says he “settled into a groove pretty quickly” at Baylor, adjusting to studying, reading, and completing projects for the program’s “extremely supportive and flexible” faculty, all of whom Justin feels “set clear expectations” yet also understood that students had jobs and families to contend with.

Of course, what no one could have foreseen was the COVID-19 pandemic, which happened in the middle of Justin’s program and forced him and his classmates to further adapt as Baylor’s classes moved online for a time. While his cohort was consequently unable to travel internationally, they did gather with the Dallas EMBA cohort at Bastrop’s Lost Pines resort and enjoyed a virtual conference interacting with business leaders from Spain, Portugal, and Morocco. When Justin thinks back on the program now, he remembers his classmates—a “great group of people” with whom he plans to stay in contact the rest of his career—and how they and the program encouraged him to “see the world of business through a different lens”: specifically, how economics, leadership, politics, and commerce all work in concert, such that Justin believes he is a “much more well-rounded ethical leader” for having gone through Baylor’s EMBA.

Today, Justin is Regional Vice President for Hanger Clinics, overseeing all of the company’s clinics in the state of Texas. His goals are “to continue to serve patients and those I work with, continue to learn, and to become as good a leader as I can.” We have no doubt Justin will go far.