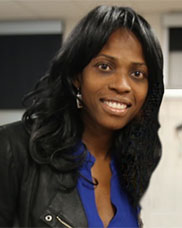 Claudia Chambers, MD (MBA 2018) is the Chair of the Division of Obstetrics and Gynecology, Dignity Health Medical Group, at St. Joseph’s Hospital in Phoenix. With special interests in minimally invasive surgery, cervical disorders, adolescent care, and reproductive health, she also serves as an Assistant Professor at Creighton University and a Clinical Assistant Professor at the University of Arizona’s Department of Obstetrics and Gynecology. Claudia received her medical degree from SUNY Upstate Medical University, completed her residency at Boston University, and earned her Executive MBA from Baylor University (2018).

“I was 41 when I entered Baylor,” Dr. Claudia Chambers shares. “I’d been out of school for over 10 years at that point, so the first few months were challenging.”

Not only is Claudia a practicing medical doctor and administrator, but she’s also a teacher, wife, and mother. Her husband’s job keeps him “equally busy,” and the whole family struggled at first to, as Claudia puts it, “catch our stride during the initial transition.”

Her first week of class at the Waco campus was, she admits, “a wake-up call.” She had to relearn how to balance her time. Realizing that even those classmates who were more recent graduates struggled to find balance, however, reassured her. “It helped that we were a cohesive group,” she says. “Everyone was in it together.”

Despite already having one advanced degree, Claudia wanted to pursue her Executive MBA-Healthcare so that she could be the “go-between” for physicians and administrators at her hospital. In her role as division chief, she’s seen firsthand how doctors can’t always grasp “the language of business,” and vice-versa—how administrators don’t always comprehend clinical concerns.

“I was doing things intuitively [before attending Baylor],” Claudia recalls. “I understood the numbers, I could do the job, but it was so much harder because I was speaking ‘doctor’ and the administration was speaking finance.”

Taking the initiative, Claudia enrolled at Baylor after her husband was transferred to Austin. She loved that Baylor’s program focused on “the rapidly changing landscape” of healthcare. The university’s Christian approach likewise attracted her.

“Throughout my career, I’ve seen a lot of business practices that don’t align with my personal values,” says Claudia, “but I could tell in all of my classes at Baylor that values matter and were central to the curriculum.”

Just 4 months into her EMBA, Claudia was offered an administrative role as Regional Medical Director at the hospital where she now works in Phoenix. Less than 6 months later, she was promoted to Department Chair. At that point, she had to decide whether to transfer to another EMBA program, or commute weekly across state lines to finish at Baylor.

“I had wonderful classmates and Stacy McCracken [the program director] was incredibly supportive. So it was an easy decision. I carved out time to fly back to Austin on those Monday nights,” she explains. “It was hard, but we had good support systems and I had a family that was 100% behind me.”

Working at the same time that she was attending school meant that Claudia would be stretched thin. “Nevertheless,” she says, “it was worth it, simply because everything I learned was relevant. I would often learn something one night, then apply it the next day.” She used a model taught in Baylor’s Negotiations class to get 25 healthcare providers to come to an agreement on a new service line—something they’d been trying unsuccessfully to accomplish for 6 years.

“It was really sitting down and putting together a framework for everyone and saying, ‘Okay, this is what we can do, this is what we can’t do, how do we expand the pie?’ For me, that wouldn’t have been possible without what I’d learned in the program.”

Today, Claudia jokes that she’s a “unicorn” in her ecosystem: she is one of very few doctors in the field of medicine who really understands the business of medicine. “I can have conversations on both sides of the table,” she says. “I can decipher and diagnose problems, and get to the truth in the numbers with ease now.”

Her advice to incoming students is to “Count the cost upfront.” Identify time and space in your life that you can devote to school. Set boundaries and stick to them.

“I am a life-long learner and I’ve always loved education,” Claudia concludes, “but this was one of the most valuable investments I have made in myself.”