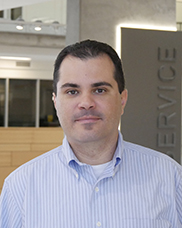 Alexandre wanted to be one of two things when he was growing up in Brazil: either a musician or an engineer. Choosing to pursue the latter, he attended school at the Federal University of Itajuba and graduated with a BS in Electrical Engineering (2002), at which point he had another decision to make. Would he go straight into the workforce, or go for further schooling? “There was a big push [in Brazil] for people to do MBAs right after college,” Alexandre explains. But after he started working and doing a lot of international travel for a Brazilian automation company, Alexandre says the choice was clear: He would “concentrate on his career” and wait to go back for an MBA after “getting some real-world experience”—expertise he felt would allow him to “contribute more” to a graduate program.

In 2010, Alexandre took a job with Emerson Brazil, a multinational Fortune 500 company that manufactures a wide range of products for and provides engineering services to industrial, commercial, and consumer markets. Four years later, the company transferred him to Texas and into more of a leadership role as a product marketing manager. According to Alexandre, he was pondering his professional future when he was advised to think about enrolling in an Executive MBA program. Alexandre realized he had let that old dream get away from him. “If you want to do something,” Alexandre says, “you’ve got to put it in your plan.” So, he did.

Every year, Emerson selects a few employees to sponsor educationally. The second time Alexandre applied, the company picked him, and in 2018 he enrolled at Baylor. Alexandre says he sought “more diversity in terms of disciplines and people” than comparable programs could offer. At almost every school other than Baylor, it seemed like the students were all the same age, all engineers, and mostly male. Alexandre wanted “different points of view” and to “not feel like a number.” At Baylor, he was able to immerse himself both academically and culturally (even developing a hearty allegiance to the Baylor Bears football team! Sic ’em Bears!) for a “well-rounded and fulfilling” Executive MBA experience.

His favorite parts of the program involved role-playing members of the Crocs company C-suite, videoconferencing with business executives in Panama, Colombia, Portugal, and the Czech Republic during the initial phase of COVID-19, and getting to revisit another old dream—running some sort of small restaurant business. For one of his class projects, Alexandre created a business plan for a theoretical bakery. When he realized he would have to work three years non-stop to maybe reach a certain level of autonomy, he decided, “That’s not for me.” But the process validated the career choice he made decades ago and will give him food for thought as he considers what the future holds.

While it was admittedly hard juggling work, school, and family (in the middle of the program, Alexandre ’s wife and son took a trip back home to Brazil that he had to miss out on), Alexandre maintains, “It was a well-managed type of hard.” He rose to the challenge with equal parts “dedication and devotion,” and says if he had to do it again, he “wouldn’t do anything differently at all as it was 100% worth the sacrifice.”

Since 2020, Alexandre has successfully leveraged his degree to “carve a new opportunity” for himself as Cybersecurity Business Director of Emerson’s Process Systems and Software business unit.