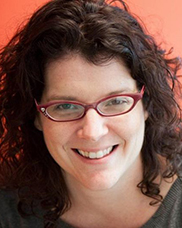 Cynthia Balusek (EMBA 2015) is Vice President of Customer Services and Support at Mize, a Florida-based startup that builds product registration and warranty software for durable goods.

In a photo from Singapore, 2015, Cynthia Balusek poses before a sign that reads: "The ones who are crazy enough to think they can change the world … are the ones that do." It's a fitting representation of a woman who has affected real and meaningful change at every company that's been lucky enough to employ her, as well as in the hearts and minds of her 2015 Baylor EMBA cohort.

For most of her career, Cynthia has worked for startups, typically in the software field. She likes and is skilled at leading teams of people, which is why she's a vice president today. Under Cynthia's leadership, many of those startups have gone public or been acquired—a testament to her relentless pursuit of success. Perhaps her most inspiring story of transformation, however, applies to Cynthia herself.

In 2013, Cynthia was the Director of Professional Services at Blackbaud, a software company serving the nonprofit sector. Although she was happy there, the opportunities to advance were limited, and as Cynthia tells it: "I felt ready to make the jump to VP." But how? Most of the jobs she saw advertised online preferred applicants with MBAs—something Cynthia didn't have. "I felt like in order to get to that next level, an MBA would be super helpful," she says. So, while still employed full-time (both by Blackbaud, and as a loving mom to two cute kiddos!), she started looking into programs.

Right away, Cynthia states, Baylor's Executive MBA program stood out for its convenient location, small size, and competitive pricing. "Then also just the people I met there," she adds. "Stacy [McCracken] and the rest of the staff said, 'We're going to take care of everything for you because you're a busy working person,' and they did." When Cynthia showed up on Day One, she received a literal suitcase full of books. A bus took her cohort to get their student IDs, and after that, she says, "I never worried about schedules, classes, books, anything. All the help allowed me to just focus on school."

Of the many useful things Cynthia learned during her time at Baylor, the one that keeps on giving is how to negotiate. "It's a key life skill," she says, and an especially important one for women, since according to Cynthia, "there are certain expectations for how women are supposed to act [in a business setting]."

Before Baylor, Cynthia sometimes struggled to hold her own on the job. She more than once talked her way out of what she was asking for, unintentionally negotiating against herself. In the MBA classroom, however, she found a "safe place to try on a different personality and practice a different aspect" than she otherwise would have. After role-playing different scenarios, Cynthia feels she became "more confident and assertive"—work that paid off in what happened next.

"This recruiter reached out to me," she starts her story, "and I told them what I wanted." At first, the recruiter objected, but like Cynthia had practiced doing in class, she stuck to a figure that she says was both what she deserved and appropriate for the market. "I was telling him, 'This is my value, and if you want me, this is what it costs.'" In a move unsurprising (but nevertheless inspiring!) to everyone who knows her, Cynthia got the recruiter to bite. She landed the job and the title, and as for her salary? It's more than doubled since graduation.

"The only way more women will gain leadership roles [like Cynthia]," Stacy McCracken, Director of the Baylor EMBA program, says, "is by strengthening their ability to advocate for themselves." Cynthia already had a strong support system at home; combined with Baylor's promise to have her back at every turn, she was able to leverage the skills she developed there to do just that, demonstrating you don't actually have to be "crazy" to change the world … you just have to want it badly enough.