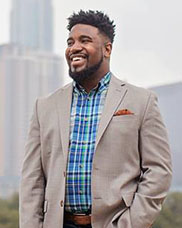 Kyle Ali (Executive MBA 2018) is an Team Lead at Google and sits on the Global Board of the Black Googler Network. He’s worked in the Austin office for the past 3 years—including throughout the duration of his time at Baylor—but it wasn’t ever his dream. Rather, the job found Kyle once he started thinking less about the career he aspired to, and more about the leader he wanted to be.

The son of two lifelong educators, Kyle Ali was originally determined to get as far away from education as possible. Entering the University of Missouri as a journalism and political science major, he thought he might become a sports reporter; maybe even one day an anchor for SportsCenter. But then, in his poli-sci classes, he learned that “black and brown students are disproportionately affected” by educational reform—or the lack thereof—and remembered the many “kitchen table talks” about “the challenges of urban education” that had influenced his childhood. He decided to take an internship with the National Education Association in Washington, D.C. There, he saw firsthand how the well-intentioned staff working to implement reform in both urban and rural schools were too often divorced from the populations they sought to serve. Desiring a “more authentic” experience, Kyle joined Teach for America.

TFA corps members commit to a two-year assignment in an inner city or rural classroom. Kyle ended up teaching A.P. Government in Baltimore, calling his stint with TFA “the most formative experience of my life.” It so “colored the lens through which [he] viewed the world,” that at the end of his two years, he joined the Teach for America staff, where he became a recruiter first in Maryland, and later in Tennessee. Understanding that “What makes a school great is great talent,” Kyle made it his mission “to attract more black and brown student leaders to the corps.” Adopting the same honest, authentic approach that he’d employed with his students in Baltimore, under Kyle’s leadership, Vanderbilt University became the #1 source of new TFA recruits in the country.

Just when he felt like he’d reached his potential at TFA—but aware all the same that he “wasn’t done learning or growing,” his success as a recruiter (emphasis: diversity equity and inclusion) caught the attention of Google. “Google had a huge focus on identifying and engaging diverse talent,” Kyle recalls; he welcomed the unexpected opportunity. Once in Austin, however, he realized that he’d spent more time building relationships in past positions than honing his quantitative skills, and that if he was going to properly analyze data for a tech company, he needed some help. “In the workforce of the future,” he predicts, “you’ll have to be able to derive insights from data sets and craft narratives about them.” He also wanted to “further develop [his] personal leadership brand”—so he applied to Baylor’s Executive MBA in Austin.

“Baylor felt right because it was small, personal,” Kyle reflects. “I wanted people to recognize when I was missing the mark, and hold me accountable to my own growth.” He was pleased to have professors who “met [him] where [he] was.” Kyle jokes that he went in with little better than “college-level algebra” skills, but that he left able to map out complex revenue projections. “Baylor teaches you the technical stuff—the formula that goes in the cell,” he says, “but they also teach you what the data means, so you can bring that perspective to the table and drive decision-making.”

A “bonus” for Kyle was graduating Baylor with a “surprise love” of negotiation. Walking into negotiation class, he admits, “I thought that, being persuasive, and an extrovert, I would be naturally great at it. I didn’t realize that there’s actually a method, a science, to being an effective negotiator.” Kyle went on to earn a professional certificate in negotiation at Northwestern between the first and second years of the program. Today, he teaches negotiation skills to women and people of color at both Google and General Assembly as his way of helping to close the equity pay gap.