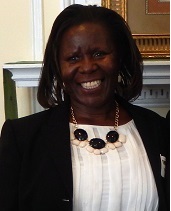 Tamara Hunter is a senior manager at Myers & Stauffer LLC, a public accounting firm headquartered in Kansas City, MO. “I’m not a CPA,” Tamara explains. “I don’t do taxes or function in an accountant capacity.” Rather, her firm provides consultation services to state and federal agencies managing government-sponsored healthcare programs.

For as long as she could remember, Tamara Hunter had been a “doer”—the hands-on, task-oriented employee who tackled what each day brought her. She dreamed of a more overarching position, responsible for longer-term strategy and growing her firm as a whole. Pursuing an MBA, she hoped, would “broaden my thought process, and help me get ahead in my career.” She knew she had much to learn, from the “business language” tossed around in executive-level meetings to managerial concerns: or “what goes on above your head that you need to be aware of.”

She’d already applied to UT-Austin’s MBA program when she saw an ad for Baylor’s Austin EMBA program. Tamara reached out to the Program Director Stacy McCracken; Stacy suggested that the two women meet for coffee. “Casual, in-person conversation works best for me,” Tamara notes. Right away, she was impressed by the time and attention Baylor’s program afforded her as a candidate. What sealed the deal, though, was finding out that Baylor has a sister school in Zambia—Tamara’s country of origin! “Stacy had such a passion when discussing how she had gotten to know my country and my people,” recalls Tamara. “So I applied, and the rest is history.”

Wonder woman extraordinaire Tamara started Baylor’s Executive MBA program and a new job at the same time. She’d just been promoted into a management position at Myers & Stauffer when classes began, commencing a delicate balancing act between Tamara’s disparate obligations to family, self, and school. She describes sitting down with her daughter, stepdaughter, and husband and talking through what her going back to school would mean for the Hunters. It was an exciting, albeit precarious, time, as Tamara’s stepdaughter was also starting her freshman year in college, and her daughter (a senior in high school) was just then agonizing over which college to attend.

Tamara had to develop an equally clear schedule and game plan with her boss, who she calls “very supportive,” as she would continue working full-time throughout the duration of the program. “Getting everyone on board with me really helped,” she says. Tamara advises incoming Baylor students to do the same: “Before applying to any program, assess the reason(s) why you want to go in, and set realistic expectations about what you want to get out it. Make sure you’re compromising in the right areas. And ask for help—it doesn’t show weakness; it shows you understand how your actions impact the people around you.”

Her experience at Baylor, Tamara says, was “awesome.” As compared to UT, Baylor was “smaller and felt more intimate and like a family—as opposed to being a number in this huge room and that’s how you’re known.” Welcomed by admin and her classmates alike, Tamara “enjoyed every moment at Baylor and all the people I got to know.” She graduated in May 2015 with a degree and a whole new attitude that inspired her to “offer our services to clients in a way that helped them to understand they were first in my mind.” Her boss noticed how well Tamara multi-tasked and promoted her again, this time to senior manager, where she gets to hire staff, bring on new business, and generally usher Myers & Stauffer into the future, just like she always wanted. “Baylor gave me that ability, the knowhow and the focus,” she says.

Top tip: Tamara’s best suggestion for EMBA candidates is to “share as much as you gain. Be an active participant, and let other people draw on your knowledge, too.” When her classmates shared their experiences and passions with each other, “Everyone grew together.”