Your partner just walked in and you can tell from her facial expression that something is weighing heavy on her mind. You ask what’s wrong, and right as she begins to tell you, your phone rings. You answer the phone. It’s a client asking about a listing. You talk with the client briefly, hang up, then ask your partner to start again. Your partner begins talking only to be interrupted again a few minutes later when your phone pings. This time it’s an email. You begin to respond to the message but tell your partner to keep talking and assure her that you are listening. Suddenly, your partner asks you what she should do? In that moment, you realize you hadn’t heard anything she said. You just phubbed your partner, twice. 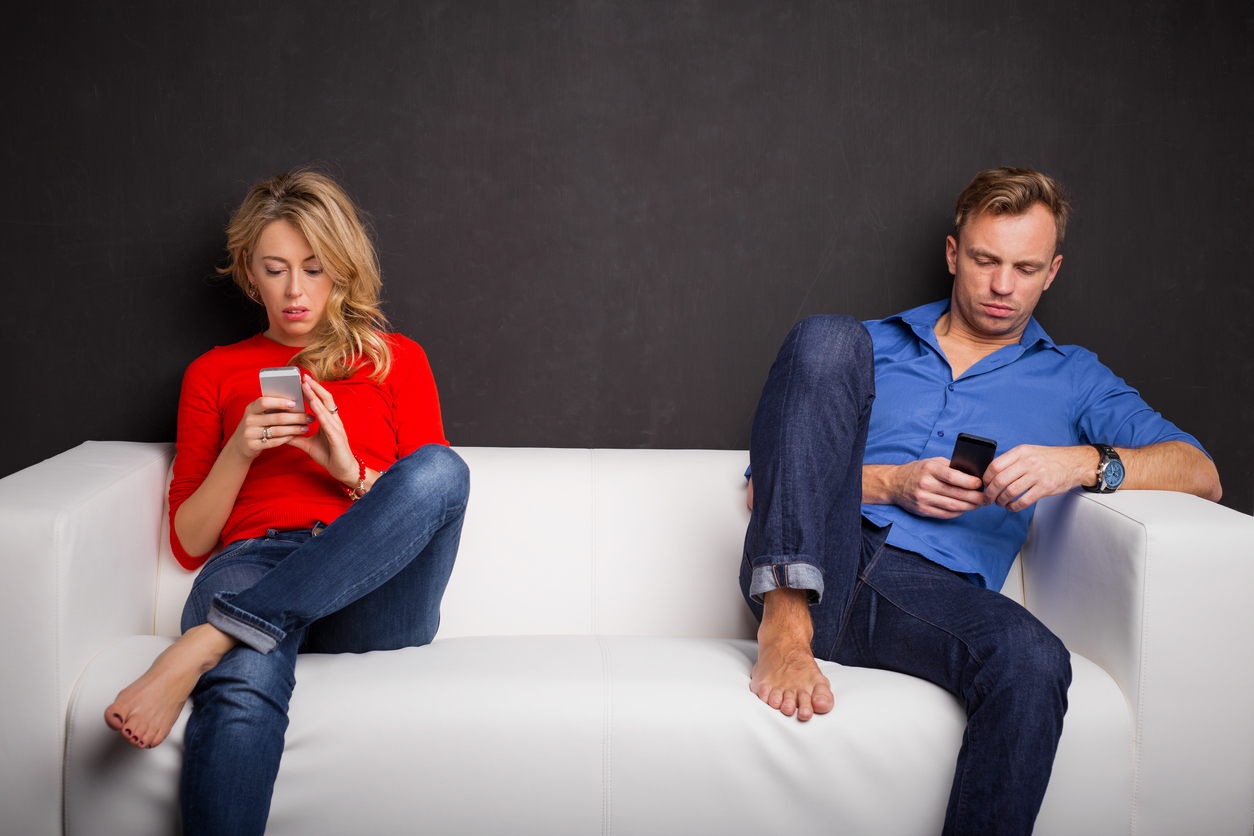 Phubbing is a portmanteau of the words “phone” and “snubbing” and occurs when your conversation with someone is interrupted by him or her attending to a cellphone or when you are in the presence of another but he uses his cell phone instead of communicating with you. Partner phubbing (Pphubbing) is the extent to which this behavior occurs between significant others.

The presence and use of cell phones is ever-increasing causing the boundaries that separate our work and other interests from our romantic relationships to become more and more blurred. As a result, the occurrence of Pphubbing is nearly inevitable. In fact, from a sample of 143 individuals involved in romantic relationships, seventy percent responded that cell phones “sometimes,” “often,” “very often,” or “all the time” interfered in their interactions with their partners.

The present study primarily sought to investigate the prevalent behavior of Pphubbing and its impact on both relationship satisfaction and personal well-being. Secondary objectives were aimed at better understanding the process by which the behavior impacts relationship satisfaction by researching the potentially mediating impact of cell phone conflict and moderating effect of attachment anxiety. Attachment anxiety is the degree to which an individual fears abandonment and worries whether he or she will be accepted in relationships. People high in attachment anxiety seek self-validation from others, while those lower in attachment anxiety do not require such external validation from others. Cell phone conflict is simply arguments over cell phone use.

The investigation was divided into two smaller studies. The first study was a pre-test to build and validate a measure of Pphubbing (partner phubbing). The second study assessed the proposed relationships summarized in this model:

For study one, an initial pool of over 100 items was generated to measure Pphubbing. Items were drawn from the academic literature and popular press sources, as well as from approximately thirty-five-item lists made by individual marketing research students. The initial pool was then screened for redundant or unrelated items, resulting in a reduction of the pool from 100 plus to only 19 items. The resulting 19 items were then included in a pre-test given to 308 US adults who were asked to indicate how frequently their partner engaged in each of the 19 behaviors as it relates to his or her cell phone use. The data was then analyzed through exploratory factor analysis and resulted in the reduction of the 19-items into a 9-item Pphubbing measure. In study two, 145 US adults first responded to the 9-item measure of Pphubbing developed in study one, and to other measures.

Simply stated, our study found that Pphubbing creates conflict over such use of one’s cell phone which in turn decreases relationship satisfaction, and ultimately personal well-being through decreased life satisfaction and increased depression.

So, what does all this mean for real estate sales professionals? Since nearly every real estate professional carries a cell phone, the potential for phubbing is ever present for those in romantic relationships. The after-business hours temptation to respond to emails, take phone calls from overzealous clients, or update a social media post on a listing is strong, but, ultimately, giving in to such temptation while in the company of one’s partner is detrimental not only to the relationship but also your partner’s overall well being. 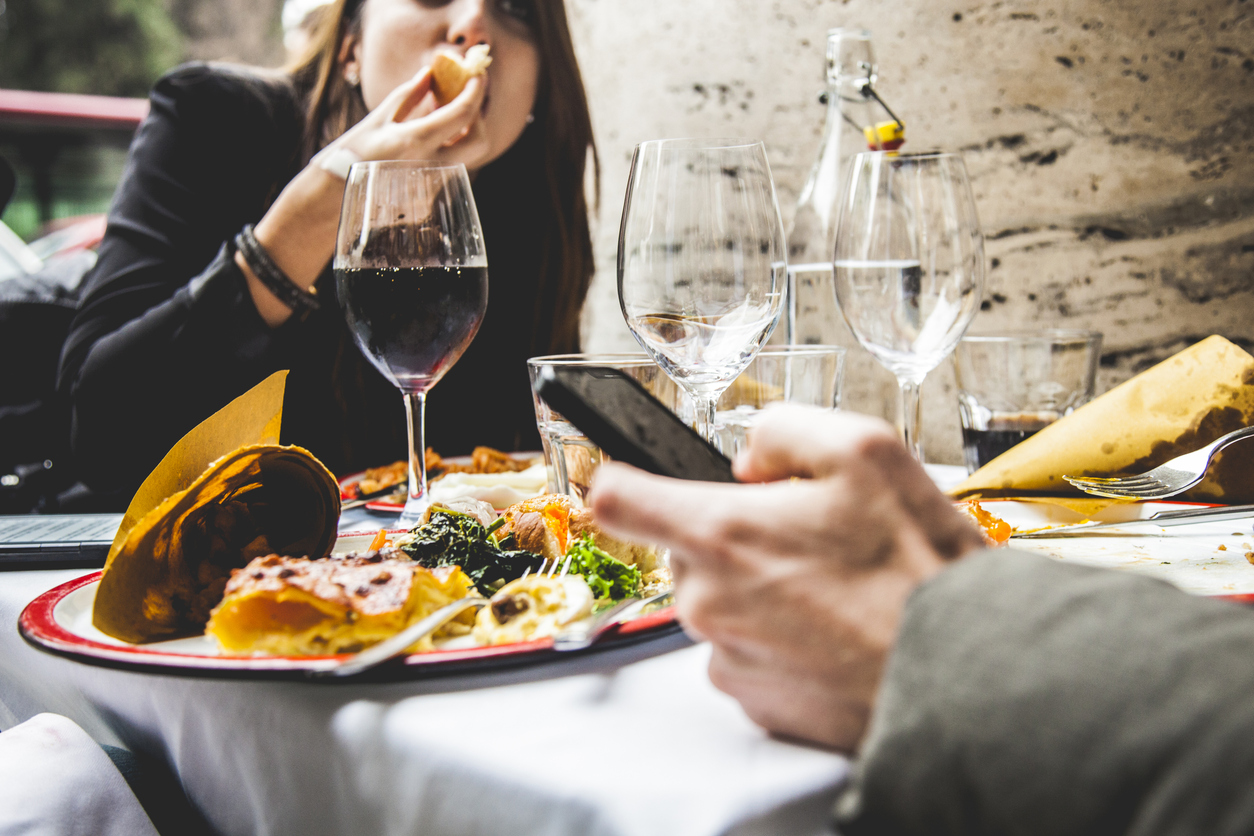 Even the mere presence of cell phones has been shown to decrease perceived closeness, connection, and conversation quality between partners.

The displacement hypothesis helps to explain the deleterious effects of Pphubbing on relationship satisfaction. According to the displacement hypothesis, time spent on cell phones may reduce (displace) meaningful interactions with one’s significant other. Conflict over cell phone use may then arise not because of the cell phone use itself but because it usurps time available for meaningful and enjoyable interactions with your partner.

As a real estate professional, you’re inherently working with several listings at once and are undoubtedly tackling several tasks at a time throughout the day, so you feel you are a great multitasker. However, multitasking is a common way cell phone use interferes with relationships. Attention is such an important factor in healthy romantic relationships, and one cannot be fully present in a relationship and give their partner adequate attention when distracted by their cellphone.

Cell phones, originally designed as a communication tool, may actually, ironically, impede rather than cultivate satisfying communications and relationships among romantic partners. With approximately 40-50 percent of all marriages ending in divorce, the institution of marriage and romantic relationships in general are under attack. With that being said, the findings of our study regarding how cell phone use impacts relationships is critical. Given that marital/relationship satisfaction is a cornerstone of both individual and familial happiness and well-being consider assessing the occurrence of phubbing in your own relationship. Although dialing back your total cell phone usage may be difficult, especially if you use it to work away from the office or on the go, a good place to start is with reducing your cell phone usage around your significant other. Developing the self-control to put away your cell phone in favor of meaningful, distraction-free interactions with your romantic partner will yield benefits that far outweigh that one missed call, unread email, or unchecked listing.

Roberts, James A. and Meredith E. David (2016), “My Life has Become a Major Distraction from My Cell Phone: Partner Phubbing and Relationship Satisfaction Among Romantic Partners,” Computers in Human Behavior, 54, 134-141.

James Roberts, PhD
Professor, Director of the Center for Non-Profit Leadership and Service and holder of The Ben Williams Professorship in Marketing, Baylor University
James A. Roberts is the Ben H. Williams Professor of Marketing at Baylor University (Ph.D., University of Nebraska-Lincoln) and has been a member of the marketing faculty since 1991. He has had approximately 80 articles published in numerous academic journals. He is also the author of two books, Shiny Objects (Harper Collins) and Too Much of a Good Thing: Are You Addicted to your Smartphone?

Dr. Roberts is a nationally recognized expert on consumer behavior and has been quoted extensively in the media and has appeared on the CBS Early Show, ABC World News Tonight, ABC Good Morning America, NBC The Today Show, and has been quoted and/or featured on The O’Reilly Factor, The Doctors on CBS, Time.com, US News & World Report, New York Times, USA Today, The Wall Street Journal, National Public Radio, Cosmopolitan Magazine, Glamour, and many other newspapers, magazines, websites, and television appearances.

Current research interests include the pursuit of happiness through money and material possessions and investigating the antecedents and consequences of smartphone addiction and its impact on personal happiness and professional productivity.

Meredith E. David is an Assistant Professor of Marketing in the Hankamer School of Business at Baylor University. Before joining the Baylor faculty in 2014, she completed her PhD in Business Administration at the University of South Carolina. Dr. David’s research focuses on consumer behavior and well-being and appears in numerous journals including the Journal of Business Research, Journal of Advertising, and Psychology & Marketing. She has been interviewed and quoted in ABC News, Fox News, Oprah.com, Redbook Magazine, Consumer Reports, Health Magazine, MedicalResearch.com, among others.