The Stigma Turbine: (De)Stigmatization in the Real Estate Market

You have probably experienced situations where buyers, homes, or entire neighborhoods have been stigmatized. For example, you may have had buyers who were reluctant to look at a neighborhood near a cemetery or to consider a house where someone committed suicide. You may have even felt stigmatized yourself by people with negative stereotypes of realtors. Stigmas are subjectively discredited attributes such as physical conditions, behaviors, and group membership. The emotional reactions created by stigmas can prevent your buyers from making smart decisions and can limit your sales opportunities. In this article, we draw on our research on stigmas in the marketplace to offer three action steps you can take to neutralize stigmas in real estate (Mirabito et al. 2016). 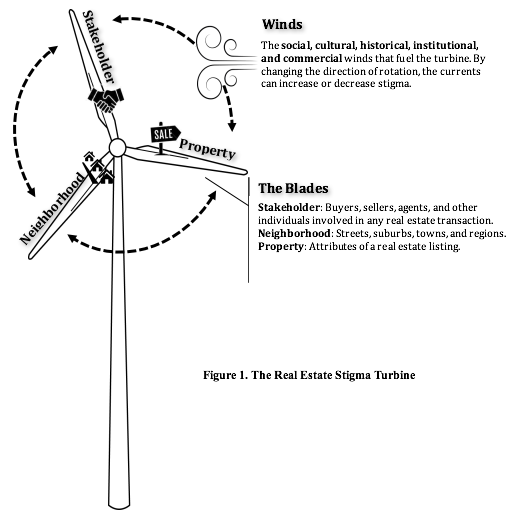 To illustrate how stigma manifests in commercial markets such as real estate, we characterize stigma as a wind turbine. Like turbines, stigmas are powerful, dynamic and continually evolving. Three blades, representing properties, neighborhoods, and stakeholders, respectively, intersect in a central hub. Homes on the property blade are stigmatized by subjective negative features, such as being haunted, or being the site of a violent death. The neighborhood blade encompasses streets, towns, or regions with distasteful reputations. The stakeholder blade embodies the buyers, sellers, agents, and other people involved in the real estate transaction, all of whom could stigmatize or be stigmatized.

Just as atmospheric winds propel turbines, the real estate stigma turbine is propelled by the metaphorical social, cultural, historical, institutional, and commercial forces that can both fuel and attenuate the stigmatization process. For example, the media is a cultural force that can stealthily reinforce – or negate -- stereotypes. Consider how Marge’s short-lived real estate sales career on the animated show The Simpsons characterizes real estate agents as self-serving and untruthful. The popular Phil Dunphy on Modern Family, however, may help boost the reputation of realtors (Bauder 2016). Government and other institutions can also influence stigmas. For example, financial redlining was initially fostered by Federal Home Loan Bank Board recommendations and later made illegal by the Fair Housing Act. Yet some lenders continue to restrict lending to some racial groups, and to certain neighborhoods (Yacik 2016). Just as winds ebb and flow, stigmas change over time. Once desirable property characteristics, such as popcorn ceilings and split-level house designs, are now shunned.

How Realtors and Communities Can Eliminate Stigma

A shift in the direction of the winds driving the turbine will fuel or quell the stigmatization process. The Fair Housing Act shifted the legal winds and tamped down, though did not completely eliminate, discrimination on the basis of race, religion, sex, and family status. Realtors and communities can neutralize the cultural winds that drive stigmas by dismantling the three building blocks of stigmas: (1) labeling differences; (2) creating stereotypes by connecting the labels to damaging beliefs; (3) using the stereotypes to justify mentally separating the labeled group from the mainstream (Link and Phelan 2001).

Step 1: Replace stigmatizing language about discredited characteristics with positive labels. All human differences can be labeled, but some labels carry more weight than others. For instance, in most cultures, birth month and eye color are less important than race, gender, and physical condition. Once a label takes hold, however, it may become understood as a natural distinction. Marketers can avoid stigmatized labeling by choosing value-neutral titles; for example, fashion retailer Lane Bryant has replaced the plus-size moniker with her size and The Association for Retarded Citizens has rebranded itself as The Arc. In real estate, changing the name is often the first step in destigmatizing neighborhoods. The historically redlined Green Valley subdivision in Arlington, VA, for example, is now called Nauck. Similarly, using the terms broker and brokerage can help an agency disassociate itself from negative stereotypes associated with the label realtor.

Step 2: Actively refute stereotypes by vividly promoting counterfactual evidence. Stereotypes emerge when people’s cultural beliefs and personal experiences lead them to forge a mental connection between labeled attributes and undesirable characteristics. Stereotypes are difficult to disrupt because contradictory evidence is uncertain and ambiguous, and thus easily dismissed. To be effective, counterfactual information must be vivid, as when Guinness challenged the disability stereotype with its Friendship ad. The commercial shows six men engaged in an intense game of wheelchair basketball. Near the end of the spot, five rise from their wheelchairs, a dramatic scene that implies disability-related stereotypes are superficial. Negative stereotypes of realtors as pushy salespeople devalue the occupation, making it one of the least prestigious according to a recent poll (Mekouar 2016). In the same poll, survey respondents ranked doctors, scientists, and firefighters—people who others rely on in times of crisis—as the most prestigious occupations. While buying a house is not life threatening, it is frequently the most stressful event most Americans will experience ("Buying a House" 2016). By showing how realtors fight for consumers’ dreams, the recent Get Realtor® campaign seeks to break negative stereotypes and reposition realtors as people to rely on (National Association of Realtors 2016). Many real estate firms send out quarterly market reports that provide valuable information to local residents with no explicit sales pitches. 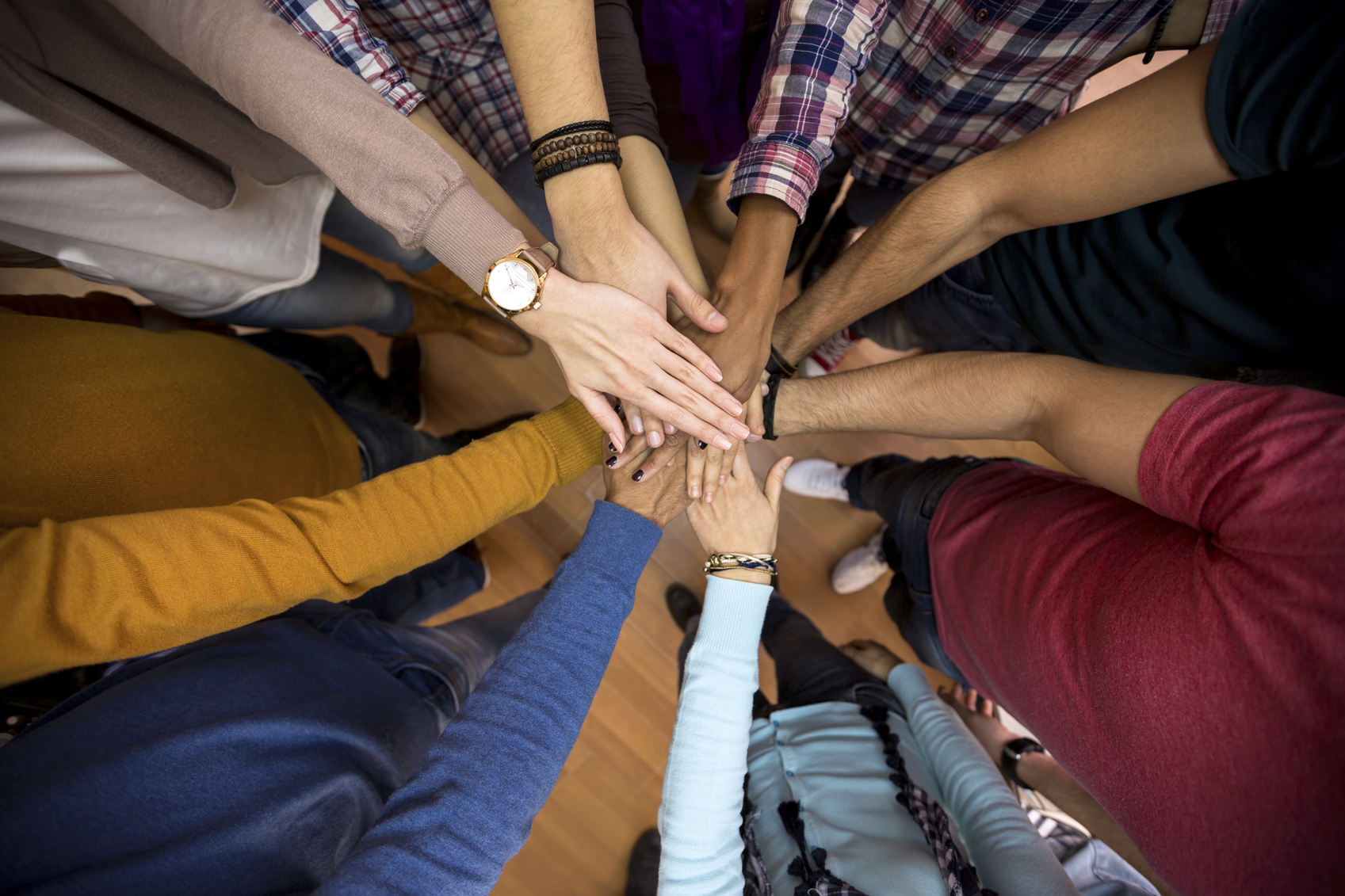 Negative stereotypes provide the psychological justification for mentally distancing a stigmatized other. The in-group perceives the stigmatized out-group as homogenous and different. Marketers can interrupt the separation process by calling attention to the similarities between the two groups. During San Francisco’s Pride Celebration and Parade, Burger King sold Whoppers in rainbow-colored wrappers, with the copy, We are all the same inside (Steinmetz 2014). Similarly, communities can invest in desirable facilities to create unity. Leaks from an oil tanker led Mantua, Virginia, to build new schools and a community center to encourage nonresidents to think of Mantua as a town they’d like to live in, rather than as a town with remediated oil tank leaks. Realtors often take advantage of opportunities to participate in local events and initiatives to show pride and support for and identification with their communities.

Neutralizing stigmas takes courage but the results can be rewarding, on a personal, commercial and societal level. By engaging in these three actions, you can help turn the winds blowing the stigma turbine and help to destigmatize buyers, homes, neighborhoods and your own profession.

(2016), "What Most Prestigious Us Jobs Have in Common…and It’s Not Money," Voice of America, https://blogs.voanews.com/all-about-america/2016/04/01/what-most-prestigious-us-jobs-have-in-common-and-its-not-money/.

Jane Machin, PhD
Assistant Professor of Marketing, Radford University
Dr. Jane Machin is Assistant Professor of Marketing at Radford University, where she currently teaches creativity and innovation. Her research focuses on the intersection of problem reframing, creativity and consumer wellbeing and has been published in the Journal of Public Policy and Marketing, Appetite and Marketing Education Review. Prior to earning her PhD at the University of Pennsylvania, Dr. Machin worked for several years in brand management for Unilever PLC.

Ann Mirabito, PhD
Associate Professor of Marketing, Baylor University
Dr. Ann Mirabito is Associate Professor of Marketing at the Hankamer School of Business at Baylor University where she teaches the MBA and healthcare EMBA marketing courses. She is the recipient of the Baylor University Hankamer School of Business Teaching Excellence Award, the Rachel Hunter Moore Outstanding Faculty Award, and the Mortar Board Circle of Achievement. Her research focuses on consumer well-being including: wellness at work; improving outcomes and satisfaction with healthcare; threats to well-being from stigma; and consumers’ challenges in managing uncertainty and risk information. Dr. Mirabito’s research is published in leading marketing and medical journals including Harvard Business Review, MIT Sloan Management Review, Journal of Public Policy and Marketing, Annals of Internal Medicine, and Mayo Clinic Proceedings.

Natalie Ross Adkins, PhD
Associate Professor, Drake University
Dr. Natalie Ross Adkins is Associate Professor at Drake University where she has responsibilities in both the undergraduate marketing program and the Masters of Business Administration program. An award-winning researcher, Dr. Adkins’ research focuses on consumer literacy across service domains and the impact of the stigmatization process on consumers’ identities and behaviors in the marketplace. Throughout her career, her work has explored various public policy issues of marketing targeted at vulnerable populations. Her research has appeared in the Journal of Consumer Research, Journal of Macromarketing, Journal of Public Policy and Marketing, and Journal of Consumer Affairs.