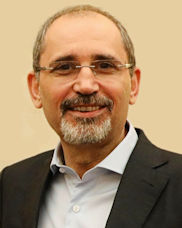 Ayman Safadi has served as Minister of Foreign Affairs & Expatriates for the Hashemite Kingdom of Jordan since 2017 and has also served Deputy Prime Minister since October 2020. As you can see in his Twitter posts, he meets on a daily basis with foreign ministers and heads of state of countries in all regions of the world. In previous public appointments, he served as adviser to King Abdullah, Minister of State, spokesperson for the Jordanian government, and spokesperson for the United Nations Assistance Mission to Iraq.

Safadi began his professional career in journalism and communications. He has served as CEO of Abu Dhabi Media Company, Director General of Jordan Radio and Television Corporation, editor-in-chief and columnist for the Al-Ghad daily newspaper, and editor-in-chief of The Jordan Times.

Mr. Safadi holds a B.A. in English Language and Literature from Yarmouk University and a Masters of International Journalism from Baylor University.