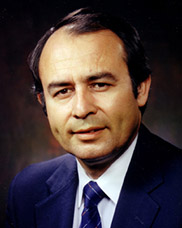 Abelardo L. Valdez is an international lawyer in Washington, DC. He served as the United States Ambassador and Chief of Protocol for The White House from 1979-1981. Valdez is a former Assistant Administrator for Latin America and the Caribbean of the U.S. Agency for International Development, as well as, General Counsel for the Inter-American Foundation. He also worked as an attorney for the Overseas Private Investment Corporation and served as military aide to President Lyndon B. Johnson. He is recognized as one of the original proponents and architects of the North American Free Trade Agreement and of a Western Hemisphere Free Trade Area, and served as an advisor on the NAFTA negotiations. Valdez received his LL.M. degree from Harvard Law School, J.D. degree from Baylor Law School and a B.S. degree in civil engineering from Texas A&M University. He pursued graduate studies in international law at The Hague Academy of International Law in The Netherlands. Valdez is a member of numerous professional and scholarly organizations, and serves on various corporate and philanthropic boards. He has lectured and written extensively on international trade, investment issues, and U.S.-Latin American relations.