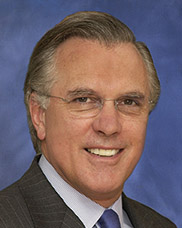 Richard Fisher serves as president and CEO of the Federal Reserve Bank of Dallas. Prior to this position, he was vice-chairman of Kissinger McLarty Associates, a strategic advisory firm headed by former Secretary of State Henry Kissinger. He was also a senior advisor for FCM Investors and for the law firm of Covington & Burling. Fisher was Deputy United States Trade Representative with responsibility for U.S. trade policy in Asia, Latin America and Canada. He has led numerous high profile negotiations and bilateral trade agreements. Fisher is the Chairman of the American Assembly, Co-Chairman of the Madison Council's International Committee of the Library of Congress, and Chairman of the Council on Foreign Relations Congressional Roundtable on International Trade & Economics. He is also an Honorary Fellow of Hertford College at Oxford University, and a Fellow of the American Academy of Arts and Sciences. Fisher attended the U.S. Naval Academy, received a B.A. from Harvard, studied at Oxford, and received an M.B.A. from Stanford.