President and CEO, Soluciones Estrategicas and Former Minister of Trade and Industry, Mexico 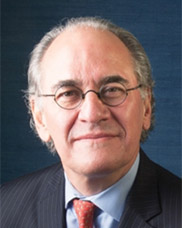 Herminio Blanco Mendoza served in four Mexican presidential administrations and was a key member of the team responsible for Mexico's successful emergence onto the world economic stage. Blanco was Secretary of Commerce and Industrial Development, Undersecretary for International Trade Negotiations, Chief Negotiator of the North American Free Trade Agreement (NAFTA), Undersecretary for International Trade, Advisor to the President, and Advisor to the Secretary of Finance. Blanco led the team responsible for the successful negotiation of seven free trade agreements with ten Latin American countries, an agreement with Israel, the Mexico European Union FTA, the FTA with European Free Trade Association (EFTA) and launched the negotiations process for the Mexico-Japan FTA. Additionally, during his tenure as undersecretary and secretary his team undertook the negotiations of bilateral investment treaties with 11 countries. He was also in charge of the team which brought to Mexico major investment projects by some of the largest corporations from the USA, Europe and Japan. Blanco taught at Rice University, at Instituto Tecnológico de México and at El Colegio de México. He received his Ph.D. in economics from the University of Chicago.