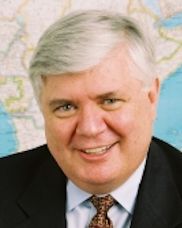 Stephen Hayes is the president and CEO of The Corporate Council on Africa (CCA), a post he has held since 1999. During his tenure, the CCA has grown from 86 members to more than 200 and its members now represent about 85 percent of US private investment in Africa. Under his leadership, the CCA has pursued a broad agenda of trade and investment promotion, policy advocacy, public-private partnership, and citizen diplomacy.

Mr. Hayes’ service in the international non-profit sector began in 1968 when he volunteered to work in a Middle Eastern refugee camp. He was founder of the American Center for International Leadership and has held key positions in the World Alliance of YMCAs in Geneva and AFS International, the world’s largest student exchange organization.

His service has been recognized with numerous awards, including the Ron Brown Award for International Leadership (the highest award of the US Department of Commerce), the 2008 annual award of the Africa Chamber of Commerce of the USA (then-Senator Barack Obama was the previous recipient), and the 2004 Phelophepa Humanitarian Award, presented by the Transnet Foundation in South Africa, chaired by Bishop Desmond Tutu. He holds an undergraduate degree from Indiana University and a Masters of Agricultural Economics from Texas A&M University.