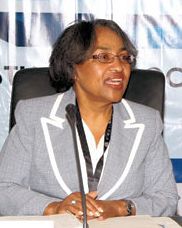 Cynthia Akuetteh is deputy assistant secretary for African affairs in the U.S. Department of State. Ms. Akuetteh joined the U.S. Foreign Service in 1984 as an economic officer, and many of her assignments have had an economic focus - deputy division chief in the Office of Bilateral Trade Affairs, international economist in the Office of Economic Sanctions, senior Venezuela desk officer and international economist in the Office of Energy Policy, and deputy director of the Africa Bureau’s economic policy staff, working on the Africa Growth and Opportunity Act (AGOA) and other trade issues.

Before her recent return to Washington, she served as deputy chief of mission at the U.S. embassies in Abidjan, Ivory Coast (2007-2012) and Ouagadougou, Burkina Faso (2005-2007). Before joining the Foreign Service, Ms Akuetteh worked for the Peace Corps and served as its deputy country director for Ghana. She holds a B.A. with honors from C.W. Post College of Long Island University and a master’s in national security resource policy from the Industrial College of the Armed Forces at the National Defense University, and also completed two years of graduate study at Columbia University.