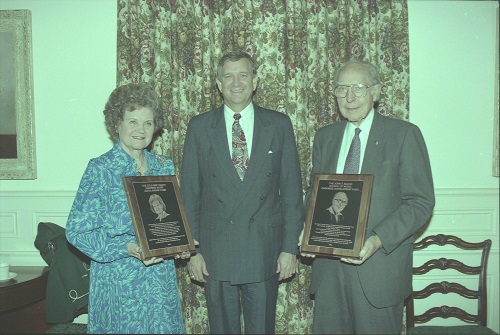 One of Baylor Entrepreneurship's first benefactors, John F. Baugh, was himself an entrepreneur. Born and raised in Waco, he started working at a grocery store when he was in junior high school. He went on to become the founder and senior chairman of SYSCO, the largest wholesale food distributor in the world. In 1976, as the recipient of the food industry's Heritage Award, he became the first person inducted into the Institutional Food Services in America Hall of Fame. He was also a member of the Texas Business Hall of Fame, received the Herbert Hoover award and other industry awards, and was listed in Who's Who in America and in the World.

An active member of the Houston Downtown Rotary Club for over 40 years, he also belonged to the Petroleum Club, the University Club, Lakeside Country Club of Houston and Quail Creek Country Club of San Marcos.

Mr. Baugh was a Regent Emeritus of Baylor. He received many awards as a result of his commitment to Baylor, including the Alumnus Honoris Causa and W.R. White Meritorious Service Award given by the Alumni Association.

Mr. Baugh and his wife, Eula Mae Tharp Baugh, have been honored for their long standing support and generosity to Baylor with the Founders Medal, the most distinguished award given by the university. It is reserved for men and women whose service and contributions have been of highly significant value to the life of the institution. Mr. and Mrs. Baugh have also received the Herbert H. Reynolds Award, and the James Huckins, Pat Neff, and Presidents Medallions.