Welcome to the Global Health Week Research Presentation Session! Below will be the list of presenters featured in today’s event. Take a look at their abstracts and hop on into their Zoom presentations! 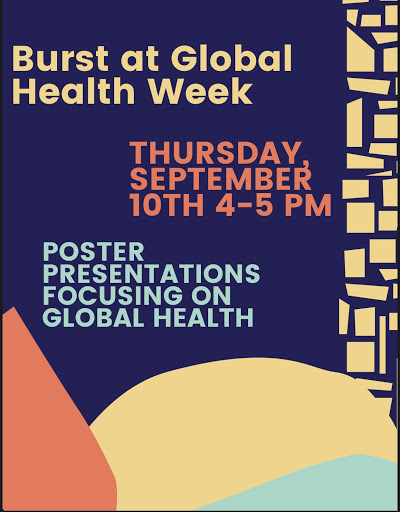 In 2016, the Chilean Congress passed a new labeling law for processed foods that required front-package warnings for high levels of sodium, sugar, and fats. This law was one of the first in Latin America to require such warnings and was met with high levels of opposition from the processed food industry. The literature on social determinants of obesity has analyzed nutritional alternatives and education as one of the factors that may affect health outcomes for adults and children. Few studies, however, have analyzed whether socioeconomic status and other social variables have a variation in their significance after legislation focused on increased nutritional labeling. Using data from the National Socioeconomic Characterization Survey and the Longitudinal Survey of Early Childhood, both of which have multiple waves over the past decade, it was possible to observe the variations and similarities in obesity levels for different social groups, as well as how the effects of social determinants of obesity in children have changed based on the implementation of the 2016 nutritional labeling law. This work has set the basis for further analyses that may use growth-curve and mixed-effects techniques.

Introduction: Similar to many low- and middle-income countries, Somaliland has a high burden of surgical conditions in children and a lack of pediatric infrastructure and workforce, although the pediatric anesthetic capacity of Somaliland is poorly defined. Without quality anesthesia care, there are increased risks during perioperative care, particularly among children. Moreover, the World Health Organization-World Federation of Societies of Anesthesiologists (WHO-WFSA) has developed standards for global anesthesia care including metrics for capacity, equipment, infrastructure, and workforce. The purposes of this study are to describe anesthesia capacity in Somaliland for children, and to make recommendations for scale-up of pediatric anesthesia care.

Methods: Data on pediatric anesthesia capacity were collected using a hospital capacity survey and surgical record review. A total of 15 private, charity, and government hospitals were included. Data included hospital characteristics (location, type, catchment population), workforce (anesthesiologists and anesthetists), infrastructure, and anesthetic equipment. A total of 1,255 children’s surgical records were reviewed to collect data on who administered anesthesia and the type of anesthesia given. Of the available data, Somaliland’s anesthesia capacity was compared to WHO-WFSA standards.

Results: Overall, Somaliland did not reach most of the target goals for anesthesia capacity defined by the WHO-WFSA, with four indicators lagging by 77% or more. The greatest need was for anesthesiologists, especially pediatric trained anesthesiologists. The majority (85%) of the pediatric surgical procedures used general anesthesia administered exclusively by anesthetists. Compared to rural regions, urban regions have most of the country’s anesthesia workforce (52%), infrastructure (55%), and equipment (61%), as well as provide more pediatric surgical procedures (76%).

Conclusion: Our study found a vast need for anesthesia capacity, workforce, and equipment for children’s surgical care across Somaliland. The disparities in anesthesia capacity between urban and rural regions in Somaliland are indicative of complex disparities and barriers to accessing healthcare, as the majority of surgical resources are concentrated in few places. Scale-up of surgical care will require expansion of anesthetic manpower, resources, and infrastructure.

Methods: This retrospective study was conducted at TTH located in Northern Ghana. All neonates who died in the Neonatal Intensive Care Unit (NICU) from 2013 to 2017 were included and data was obtained from admission and discharge books and mortality records. Bivariate and multivariate logistic regression were used to assess predictors of timing of neonatal death.

Results: Out of the 8,377 neonates that were admitted at the NICU during the 5-year study period, 1,126 died, representing a mortality rate of 13.4%. Of those that died, 74.3% died within 6 days. Preterm birth complications (49.6%) and birth asphyxia (21.7%) were the top causes of mortality. Predictors of early death included being born within TTH, birth weight, and having a diagnosis of preterm birth complication or birth asphyxia.

Conclusion: Our retrospective study found that almost 75% of neonatal deaths were within the first week and these deaths were more likely to be associated with preterm birth complications or birth asphyxia. Most of the deaths occurred in babies born within health facilities, presenting an opportunity to reduce our mortality by improving on quality of care provided during the perinatal period.